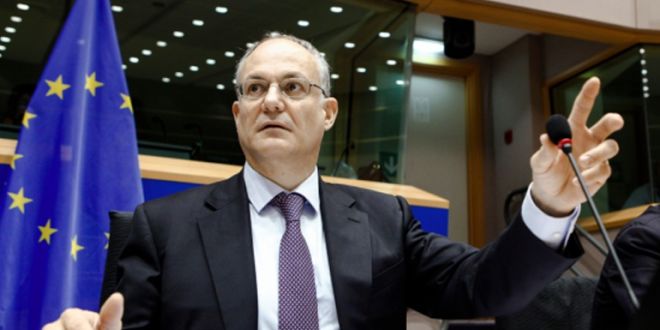 A visit to Greece by European Parliament representatives in order to oversee the “democratic implementation” of the new bailout agreement was completed today, with the head of the group, Mr. Roberto Gualtieri, describing it as “positive and successful.”
The mission of representatives from the European Parliament was completed with meetings they held with the Governor of the Greek Bank and the president of TAIPED, the privatization fund created upon demand by Greece’s creditors for the turnover of state-owned assets into private hands.
In a press conference that followed, Mr. Gualtieri expressed his admiration for the “determination of the prime minister to implement reforms” and said that there is “positive and creative collaboration between the government and European institutions.”
“Considerable progress has been made,” said Mr. Gualtieri, referring to steps taken in bridging the differences between Greek government and its creditors over the “fiscal gap.”
According to representatives from the European institutions, Greece’s current fiscal gap stands at 3.5%, while Greek officials maintain that it is lower, standing at 3%.
Mr. Gualtieri, however, said that the two sides are very close to bridging the gap separating their assessment of the “fiscal gap” and also noted that a discussion of debt restructuring will be part of the bailout review.
However, Mr. Gualtieri explained that debt restructuring does not involve debt write-off but merely an extension of the repayment of loans and interest rate reduction.