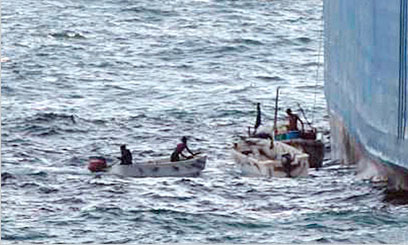 Four seamen abducted by pirates from the Greek-owned, Panama-flagged tanker “Madonna 1” have been released unharmed in Nigerian territory, the shipping company announced on Wednesday. The four – three Greeks and one Filipino – were abducted in early March while the ship was sailing without cargo about 15 nautical miles from the coast of Nigeria.

The Greek ship’s captain, first engineer and an agent of the shipping company have already returned to Greece and are in good health, the company said.

The ship was sailing with a crew of 21 and one passenger, the shipping firm’s agent, and was heading toward the port of Lome in Togo when it was attacked by armed pirates that abducted the four men. After the abduction, the ship continued its journey and the Greek Shipping ministry mobilized its crisis management team, which alerted the ministries of national defense, foreign affairs and international centers for fighting piracy to the incident.
(source: ana-mpa)