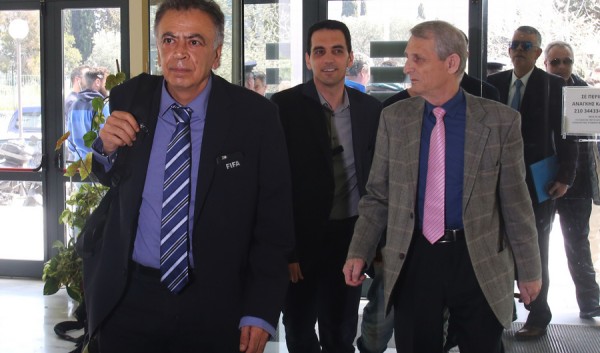 Things are starting to look tough for the Greek football scene, as once again the Greek football teams are facing the risk of being excluded from international leagues.
On Wednesday afternoon, Deputy Minister Stavros Kontonis met with the Hellenic Football Federation (EPO) and representatives of UEFA and FIFA, at the General Secretariat of Athletics. According to Kostakis Koutsokoumnis, representative of the International Federation, Wednesday’s meeting ended in a dead-end and did not give any solutions.
“Until April 1st, the Greek Cup must start again. However this wish is apparently not going to come true. We will report to the executive body of FIFA what happened and it [the organization] will make its decisions. Coming from our experience, the news is not good. I am sorry for this development, this is not good for Greek football. The meeting was constructive for many issues,” highlighted Koutsokoumnis.
He also added that “if the Greek Cup does not begin again and EPO is excluded, then we (the Greeks) will not even have the [Greek] National team in the international tournaments, neither the associations, nor the EPO officials participating in international institutions and meetings. In addition, Greece will lose a team in Europa League. As far as the Greek players who play abroad and have contracts with teams, they continue [to play] as is.
Members of EPO appeared bothered by the image of the “defenseless” — as it was characterized — Ministry of Athletics, with the Federation speaking openly about the lacking security measures. “It is unacceptable that the Ministry did not fend for the security of the participants at the meeting.  Outside of the Council of State, there were police vans with riot police forces, whereas even though today possible clashes were expected, they let them enter the Ministry,” members of EPO said. In addition, FIFA and UEFA members appeared deeply annoyed with the images that they saw as soon as they arrived, as about 20 AEK fans had raised a banner in protest.