ADEDY to Hold Strike on April 7 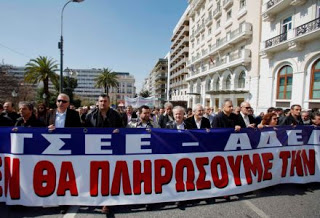 The civil servants’ union federation (ADEDY), announced on Monday a 24-hour strike against the planned social security reforms which will take place on April 7.
ADEDY is also calling all workers to be present at the rally that will take place on the same day at Klafthmonos Square at 11:00 am in order to protest against the security and pension reform plans.
In a relevant announcement, ADEDY states that “the austerity/slaughterhouse” measures that the government is proposing are not a reform that are going to save Social Insurance, but instead [they’re] part of the commitments of the third IMF memorandum that the government of SYRIZA and ANEL voted regarding the cuts of pensions, reaching 1.8 billion euro for 2016 and for the next years, in order pay out the burdensome, illegal and unjust debt of the country.”

A young student from Greece, based in Chicago, has kicked-off a digital campaign to save the Natura 2000 areas of her homeland.
Agriculture