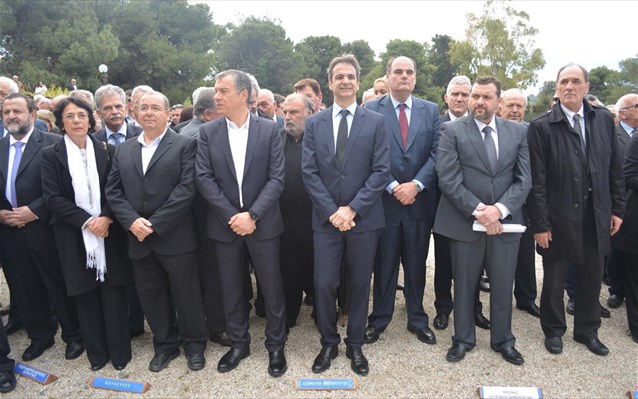 An event commemorating early 20th century Greek statesman Eleftherios Venizelos, as well as his son and three-time Greek prime minister Sofoklis Venizelos, was held in Hania, Crete, on Sunday. Among those attending were Economy Minister George Stathakis, main opposition New Democracy leader Kyriakos Mitsotakis and opposition Potami party leader Stavros Theodorakis, who each hailed Eleftherios Venizelos as a reformer and visionary, who had fought to make Greece strong and modern.
Speaking at the end of the annual political memorial service, Stathakis noted that 80 years had passed since the death of Eleftherios Venizelos, who had founded all the modern institutions of the Greek state and had “consistently served the ideas of democracy, equality and creating a strong and proud Greece.”
Mitsotakis similarly hailed him as a brave politician that had “dared to modernize Greece, to implement bold reforms, a man whose personal clock was synchronized with the clock of history.”
Theodorakis praised his vision and noted that Greece had need of a great many like him, prepared to fight bravely for the major changes that had to be made, in order to “build a strong economy without parasites.”
(source: ana-mpa)

US President’s Granddaughter Maisy Biden In Greece for Vacation