The student parade for the anniversary and celebration of March 25th was concluded several minutes after noon. For another year, heavy police forces patrolled  the area, in order to carry out the parade safely and without any unexpected incidents.
Before the commencing of the parade, in view of the celebration of Greece’s National Holiday of March 25th and representing the government, Alternate Minister of Education, Theodosis Pelegrinis left a laurel wreath at the monument of Fallen Heroes.
The parade was led as usual by the high-school of Kalavryta, “Evsevios Kypourgos,” and the students wore traditional costumes while carrying the flag of the revolution of 1821. All schools from the A district of Athens participated in the parade including elementary, junior 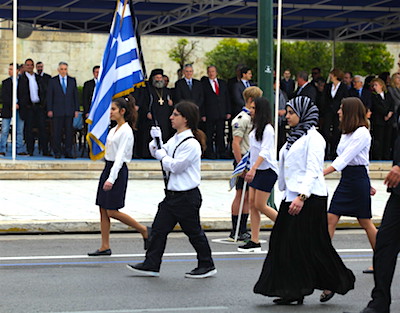 high-school and high-schools, as well as the Greek Guiding Association (SEO), the Special Olympics Team and for the first time the high-school for the deaf of Argyroupoli.
One the flag attendants that “starred” in this years’ parade was the valedictorian student who paraded wearing a headscarf. The student is from Egypt, but she was born and raised in Greece.