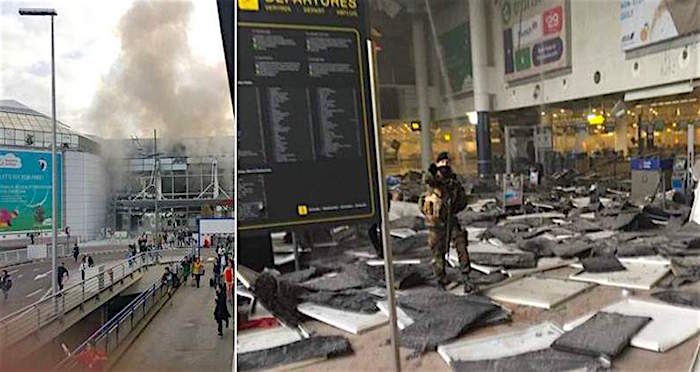 Two explosions tore through the departure hall of Zaventem Brussels airport and another explosion that went off at a metro station on Tuesday morning left several dead and dozens wounded.

According to Belgian news agency Belga, shots were fired and there were shouts in Arabic shortly before the explosions in the airport a little before 8 am, Brussels time. The explosion took place at the American Airlines departure desk. Authorities have not determined yet whether there was a suicide bomber involved or an explosive device was put near the desk.

A blast occured at the Maalbeek metro station as well. The Maalbeek station is very close to the European Commission headquarters. The Commission building has been evacuated.

Belgian authorities speak about 23 dead and 35 injured in both attacks so far.

Belgian Interior Minister Jan Jambon announced that Belgium’s terror threat had been raised to its highest level. All metro stations are closed, all flights to and from Brussels airport are cancelled, schools have been closed down and the army is guarding the city streets.

The explosions occurred four days after the arrest in Brussels of a suspected participant in the November terrorist attacks in Paris that killed 130 people. Belgian police had been on alert for any retaliation action.

Police suspect that the acts are reprisal for the arrest of Salah Abdeslam, the prime surviving suspect for November’s Paris attacks. Abdeslam was captured by Belgian police after a shootout on Friday.

Jambon, said on Monday the country was on high alert for a possible revenge attack following the capture of the 26-year-old terrorist. “We know that stopping one cell can … push others into action. We are aware of it in this case,” he said on public radio.