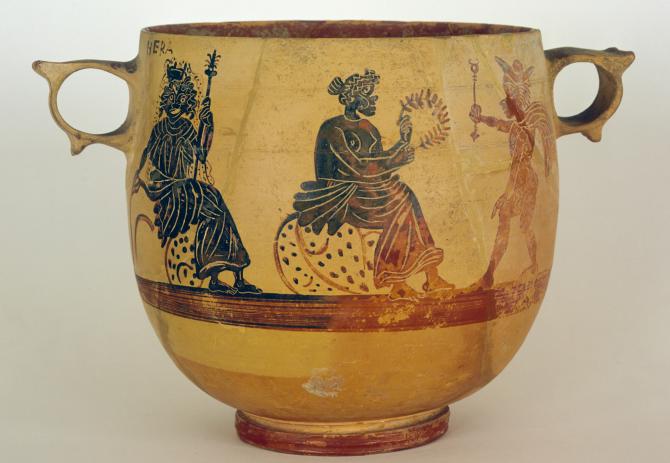 The image of black people plays a key role in the reconciliation between the everyday world of ancient Greeks and spiritual revelation, says an analysis on The Root.
The analysis is based on a scene on a skyphos — a large ceramic cup used for the consumption of large quantities of wine — that represents a parodied depiction of the Judgment of Paris, a well-known incident from Homer’s The Iliad.
Skyphoi were often decorated with exquisitely painted scenes with clear references to Dionysos, the god of wine and revelry, The Root says. On the particular skyphos, the decoration evokes a far different relationship with the divine.
According to Homer, Trojan prince Paris was appointed by Zeus, ruler of all Olympian deities, to step in and settle rival claims of consummate beauty made by the goddesses Hera, Minerva and Aphrodite.
On the skyphos, at left and center, respectively, Hera and Aphrodite are seated on thelopes of Mount Ida. Hera, queen of the gods, wields her scepter, while Aphrodite, goddess of beauty and sensuality, holds the just-presented wreath of victory. On the right, stands Hermes, the winged god of communication and safe passage.
The face of Hera leers grotesquely with staring eyes and a gaping mouth. Similarly, the representation of Aphrodite departs in a quite unexpected way from the somatic norm of the Greek figure. Rendered in strict profile, her negroid features are clearly evident. The same evocation of blackness characterizes the head of Hermes confronting her own.
All painted wares of this type are associated exclusively with the Kabeirion, a sanctuary located several miles outside the Greek city of Thebes. The sacred precinct is named after the kabeiroi, underground deities worshipped in secret. The appeal of this and other ancient mysterious religions such as the Egyptian Isis cult lay in the profound shift from the conventional obeisance to the gods to a rapturous, personal identification with the divine by initiates to the cult.
The painted scene on the skyphos could also recall a dramatic presentation of the event, perhaps a short play staged in honor of the local deities. In this case, actors such as those portraying Aphrodite and Hermes on the cup would presumably have appeared as Africans, their affect aided by carved and painted theatrical masks.
The same inclusion of blackness holds true for several other types of scenes found on the Kabeirion skyphoi. One of the most remarkable of these presents a dramatic confrontation taken from Homer’s Odyssey, the epic that follows The Iliad.
Such a view is held by scholar Frank Snowden who argues that true racial prejudice did not exist in ancient times but appeared only with the advent of the slave trade in the early-modern period.
Snowden’s view is further supported by the wide variety of sympathetic guises taken by the black form in ancient Greek and Roman art.