TechNews
GreekReporter.com Greece EU-Turkey Agreement Could Be Derailed in the Future: Stratfor

EU-Turkey Agreement Could Be Derailed in the Future: Stratfor 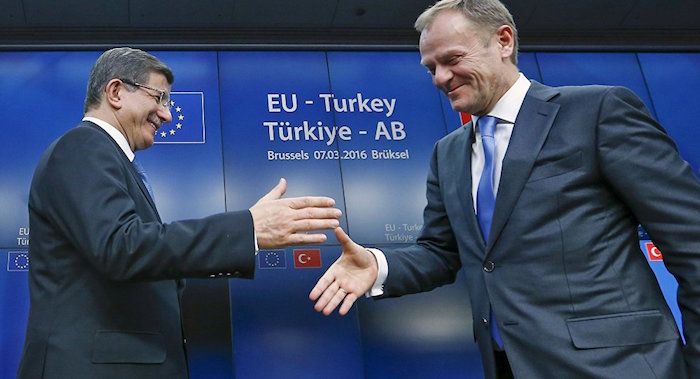 Stratfor, a geopolitical intelligence firm, has provided its own analysis of the EU-Turkey immigration agreement and the overall one of the analysis is one of doubt and skepticism over the ability and commitment of the signatories to enforce the deal.
As Stratford’s report points out, “With the March 18 agreement, Ankara agreed that all migrants arriving in Greece from Turkey will be sent back to Turkey. And for every Syrian migrant sent back to Turkey, a Syrian in Turkey will be given asylum in the European Union. The plan, however, caps the number of Syrians who can be sent to Europe from Turkey at 72,000. If that limit is reached, the European Union and Turkey would have to renegotiate.”
The report underscores that “The agreement makes partial concessions to Turkey. In exchange for accepting returned migrants, Turkey wanted to open five chapters of its accession negotiation with the European Union. (In EU accession talks, chapters represent aspects of an applicant country’s policy that must be evaluated in comparison with EU standards before it can join the bloc.) The Cypriot government countered with demands for a stronger Turkish commitment to reunifying Cyprus, which was divided into distinct Greek and Turkish states after Turkey invaded in 1974. As a result of the talks, EU leaders compromised, agreeing to open only one mostly technical and not particularly controversial chapter.”
Furthermore, “The European Union also vowed to speed up the disbursement of 3 billion euros ($3.4 billion) in financial aid that was promised to Turkey last year, and to grant Turkey an additional 3 billion euros in the future. This funding will, of course, come with strings attached, and EU leaders asked their Turkish counterparts to present concrete proposals for the use of the funds within a week. Additionally, the European Union promised to grant Turkish citizens visa-free travel to Europe by the end of June, but Ankara must first meet a long list of requirements.
According to Stratfor, “This is a controversial issue for several Northern European countries, so this part of the deal could be derailed in the future.”
In its report, Stratford also points out that “Some EU members pushed for a fast implementation of the deal, fearing that delaying its introduction would encourage migrants to cross from Turkey to Greece before the agreement takes effect.”
However, according to Startfor’s analysts, “this could be problematic. Before migrants can be legally returned to Turkey, the Greek Parliament has to recognize Turkey as a “safe third country.” The Greek government must also improve its ability to register newly arrived immigrants and speed up its process for reviewing asylum applications. Since the beginning of the crisis, Greece has struggled to provide housing for an ever-growing number of asylum seekers and to reduce the time required to process their applications. And some EU members warned that expelling people without first analyzing their cases would be illegal.”
Stratfor’s analysts also raise serious questions about “Turkey’s treatment of migrants,” which is considered to be “particularly controversial.”
As the report points out, “ the Turkish government has given some limited rights to Syrians. But there are questions about the situation for migrants from countries such as Iraq or Afghanistan who will also be sent to Turkey from Greece once the agreement is in place. Ankara promised the European Union that all migrants will be treated in accordance with international humanitarian law, which includes guaranteeing that the migrants not be sent back to their countries of origin. But to meet international standards, Turkey will have to pass new laws improving the quality of life for migrants. Failure to do so quickly could give rise to legal challenges to the EU-Turkey agreement.”
Stratfor’s analysts emphasize that “if implemented properly, the new plan could discourage migrants from trying to reach Greece. The idea is to punish people who try to reach Greece illegally by sending them back to Turkey, relegating them to the bottom of the list of asylum applicants. At the same time, people who wait in Turkey and use official channels to pursue asylum will be rewarded for their patience.”
However, they point out “for the deal to work, Turkey will have to better prevent migrants from reaching Greece, and Greece will have to become more efficient at processing asylum applications. So far, efforts to regulate the flow of migrants have been disappointing.”
On this note, the analysts point out that “on March 17, German media reported that German officials working on the recently approved NATO patrolling operation in the Aegean Sea are frustrated by its limited effect; human trafficking organizations are still managing to avoid controls and reach the Greek islands.”
In sum, Stratfor’s report raises serious doubts about how effective the EU-Turkey deal will be in resolving the migrant crisis. In fact, its analysts see a continuation of the crisis as long as the underlying causes are not being addressed.
As its authors write at the end of the report, “as the war in Syria continues, asylum seekers will probably continue to try to make it to Europe, even if their path is more difficult than before. Migrants from Syria and other Middle Eastern countries may even try to enter the European Union through more complicated routes, passing through Albania, Bulgaria or even the Caucasus. In addition, as the weather improves in spring and summer, migrants will resume taking the central Mediterranean route that connects North Africa with southern Italy. This will bring a growing number of migrants from sub-Saharan Africa to Europe in the coming months. The resulting renewed migratory pressure will test the stability of the EU-Turkey agreement and challenge the fragile consensus among EU members.”
(Source: Stratfor)