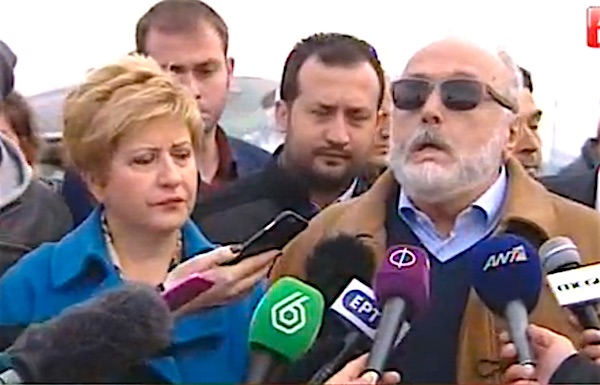 Greece’s Interior Minister Panagiotis Kouroumblis described the Idomeni refugee tent city as a “modern-day Dachau” and blamed Europe’s closed borders policy for that.
The minister criticized the living conditions of the makeshift refugee camp at Idomeni, on the Greece-Former Yugoslav Republic of Macedonia border. He went to the extent of likening the tent city to the Nazi concentration camp in Dachau.
“I do not hesitate to say that this is a modern-day Dachau, the result of the logic of closed borders… We believed in a Europe of open borders,” Kouroumblis said during his visit to the region.
The minister said that Idomeni has changed into an informal refugee center because migrants and refugees believe that the borders will open again. He also pledged that he will make sure health conditions will improve and all proper vaccinations will be administered.
“The state has made every effort, in collaboration with NGOs and ordinary citizens who give their all to help these people,” said the minister, also praising police work.
Finally, Kouroumblis denied the rumor that a rape of a 7-year-old refugee girl took place at the camp saying it was only an attempt that was stopped on time.
The unfortunate comment made by the interior minister resembles that of Culture Minister Aristides Baltas who visited Idomeni on Tuesday and stated that, “The picture at Idomeni honors Greece, as odd it may sound, he argued. As Baltas explained, “It is honoring because we are trying to convince those (refugees) who are trapped in Idomeni that there is no hope the border will open and we are not trying to chase them away or put fences around them. We are trying to convince them to move to the camps established throughout Greece.”