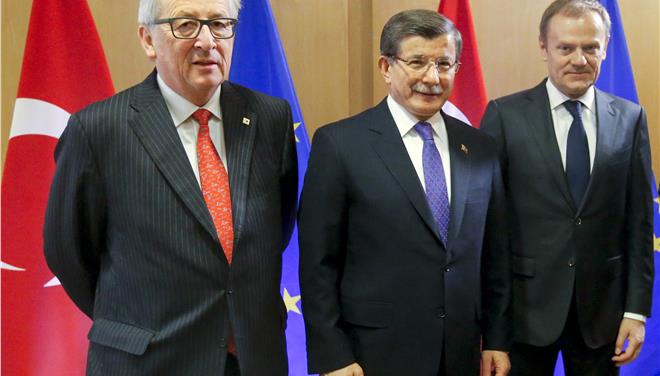 The European Union and Turkey have formally reached an accord to curb the unprecedented influx of migrants into Europe.
Speaking to reporters after talks in Brussels on Friday, European Council President Donald Tusk and Turkish Prime Minister Ahmet Davutoglu called the accord a landmark deal.
Davutoglu said that Friday was a “historic day” for his country and for the EU.
“It is also a historic day because we reached a very important agreement between Turkey and the EU. … We today realized that Turkey and the EU have the same destiny, the same challenges and the same future.”
Earlier, Tusk tweeted that a “unanimous agreement between all EU HoSG (Heads of State or Government) and Turkey’s PM on EU-Turkey Statement” had been reached.
Plan’s conditions
The deal requires that all new migrants coming from Turkey into Greece after Sunday, March 20, will be returned to Turkey in what it calls a “temporary and extraordinary measure” to end human suffering and restore order. The actual returns will start on April 4.
In exchange, Turkey, which has already sheltered nearly 3 million Syrian refugees, would get financial aid, quicker EU membership talks and visa-free travel for Turkish citizens in the Schengen zone.
Before sitting down with EU leaders in Brussels to hammer out the details, Davutoglu said that the refugees’ plight was not an issue of bargaining, but an issue of humanitarian values as well as European values.
More than 1.2 million migrants have landed on European shores since January 2015 and about 4,000 have drowned while trying to cross the Aegean Sea between Turkey and Greece.
Turkish officials are expected to be present in Greece to facilitate the transfer of migrants back to Turkey.
For every Syrian returned to Turkey from Greece, another Syrian who has legally sought asylum in Turkey will be resettled in the European Union. Priority is to be given to migrants who have not previously entered or tried to enter the EU illegally.
The resettled migrants will be given the remaining 18,000 slots made available in last July’s EU agreement on accommodating Syrian refugees.
Turkey is also to take measures to prevent any new illegal routes from Turkey to the EU from opening up, using help from neighboring states and from the EU.
And the European Union is set to speed up disbursement of $3.4 billion in aid allocated to Turkey to help with accommodation of the migrants within Turkish borders. The EU says it will provide more funding if necessary, up to a ceiling of an additional $3.4 billion, once the present amount is used up.
Human rights objections
The draft deal also says the EU will work with Turkey on any effort to improve humanitarian conditions inside Syria, particularly in areas near the Turkish border.
Human rights groups say mass deportation of refugees is against international law.
Turkey has a shaky human rights record, and some human rights groups criticize a plan they say would use people looking for refuge from war, poverty and terrorism as political pawns and merchandise.
But Europe has been struggling for months with the continent’s worst refugee crisis since World War II, and thousands have drowned in the Mediterranean after paying human smugglers to get them to Greece or Italy.
(source: VOA)