GRNews
GreekReporter.comGreeceEU Leaders Agree on Joint Stance Ahead of Friday Talks With Turkish... 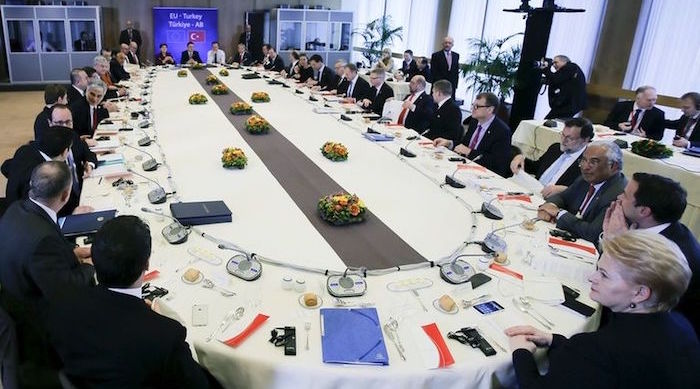 The European Union member states agreed late on Thursday in Brussels on a draft agreement on migration to be discussed with Turkey on Friday. A dinner at the end of the first day concluded without a press conference.
The EU-Turkey draft agreement, which grants Turkey some concessions that include funding in exchange for stemming the flow of migrants into the EU, will be discussed starting at 8:00 a.m. (local time) on Friday, when European Council President Donald Tusk and European Commission president Jean-Claude Juncker are scheduled to meet with Turkish Prime Minister Ahmet Davutoglu.
In statements following Thursday’s meeting, German Chancellor Angela Merkel and Italian Prime Minister Matteo Renzi said the talks with Turkey would be difficult. Merkel further said that no specific dates had been set for the start of either resettling Syrian refugees in EU countries or the return by Greece of migrants to Turkey, but noted that all EU countries wanted the agreement to go through.
Cyprus President Nicos Anastasiades, asked whether he planned to veto the final agreement, said that “if it is necessary, yes.” (Among the concessions contained in the draft agreement between the EU and Turkey is acceleration of the process allowing Turkey’s membership to the EU and the lifting of a visa requirement for Turkish nationals traveling in EU countries.)
Greek Prime Minister Alexis Tsipras, in statements made as he arrived at the EU-Turkey summit, said, “I’m looking forward to a credible agreement today in order to try to reduce or to stop the illegal flows from Turkey to the Greek islands but at the same time to create a robust legal way for the refugees [to make their way] from Turkey to the EU,” the prime minister told journalists, noting that this means to create a credible mechanism for resettlement from Turkey to the EU.
Tsipras said he also hoped the decision that the EU will take will be in line with international legislation, the Geneva Agreement and the European acquis.
“And last but not least I’m waiting today to take a decision to assist Greece in these difficult circumstances, especially in our northern borders in Idomeni where we have to face a humanitarian crisis because of the unilateral actions in the Balkan route and I think this is the shame for our common culture,” he noted.
Tsipras said there must be a decision to deescalate the “bad situation” in northern Greece and to try to find a way to provide first aid and hospitality to the refugees, while at the same time to accelerate the relocation of these people so they can reach their destination.
(source: ana-mpa)