GRNews
GreekReporter.comGreeceGreek PM Asks Leaders of France and Germany to Put Pressure on... 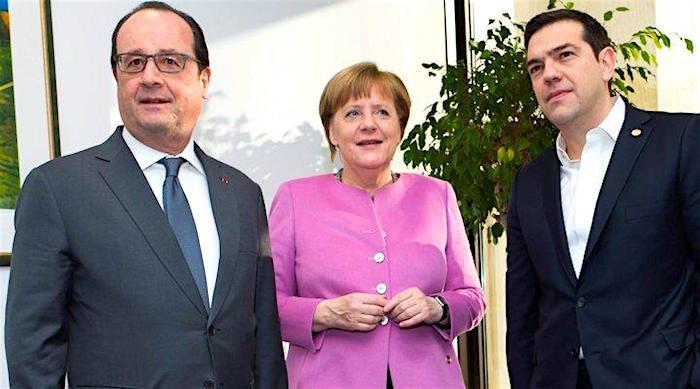 While in Brussels for the two-day EU-Turkey summit, Greek Prime Minister Alexis Tsipras had a joint meeting with French President François Hollande and German Chancellor Angela Merkel.
According to government sources, the focus of the meeting revolved around the Greek PM’s concerns about the continued refugee flows from Turkey to Greece.
According to the same sources, Mr. Tsipras insisted that the EU must exert pressure on Ankara to put an end to the flow of refugees and migrants to Greece, with the Greek PM saying that this can happen via NATO’s patrols of the Aegean sea as well as through a closer collaboration between Greek and Turkish governments.
Mr. Tsipras also requested that pressure must be exerted on Turkey for the implementation of a bilateral agreement that was signed in Smyrna for the relocation of refugees to Europe.
In addition, Mr. Tsipras pressed on the need for additional support provided to Greece as the refugee crisis is putting additional strain on the Greek economy.
According to reports, the French and German leaders expressed optimism that a viable solution will be found to the refugee problem through an attainable agreement with Turkey.
(Source: Real.gr)