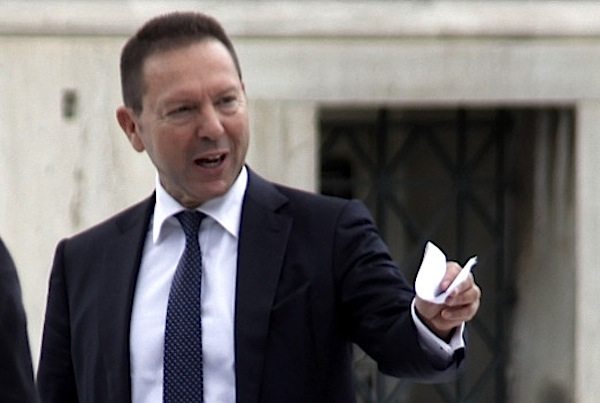 The debate on the reduction of Greece’s public debt is likely to start the International Monetary Fund’s (IMF) spring meeting on April 15, the country’s central banker Yiannis Stournaras said in an interview with Italian paper “Il Sole 24 ore” on Sunday, adding that the country will repay 3.5 billion euros to the ECB in July through the ESM.
Concerning debt talks, the head of the Bank of Greece said: “It is a commitment of the Eurogroup on November 28, 2012, when I was finance minister. According to this commitment, if Greece achieves a primary surplus and if it implements the necessary reforms, then its partners will take some measures to ease the debt. This commitment has not been fulfilled yet. I hope our partners, as well as the IMF, will be in a position to fulfill this commitment, because it’s not just a promise, it’s an agreement.”
Asked by the paper whether Greece will be able to repay its looming debt tranche to the ECB, Stournaras said the government is “negotiating effectively with its partners and there will be an agreement with its creditors for the ESM to repay the tranche.”
Commenting on the reforms Greece is implementing, he said they are being implemented not because Greece’s creditors request it, but because they are necessary to have a viable social security system. “We need a just taxation system in which all those who can pay will pay what they’re due,” he added.
He also reassured that the country’s lenders are adequately recapitalized and that the banking system is stronger now than in the past, as the CET1 and capital adequacy ratio (pro forma) indicators are approaching 18.2 pct, which is the second highest in the eurozone after Finland, which is at 20 pct.
He reiterated however, that non-performing loans remain a big challenge and that the government and the banks must take hard but necessary measures so that banks can achieve the ambitious target of reducing them.
(source: ana-mpa)

Covid-19: Vaccinations of Greeks Aged 25 to 29 to Begin Thursday