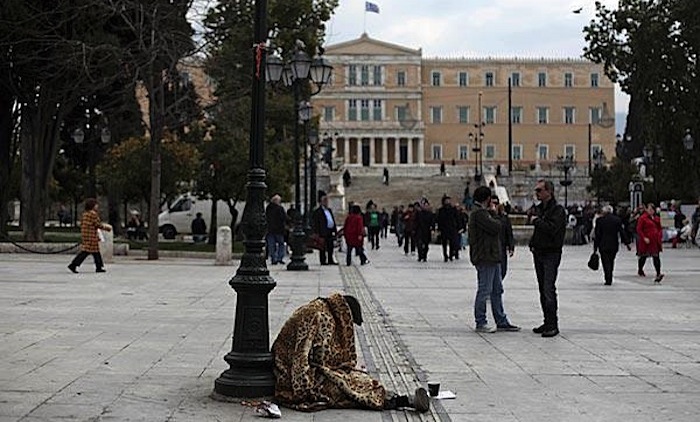 Spearheading economic growth and promoting investments to create jobs, improving the stability of public finances and providing an effective social safety net are crucial to help Greece recover from its six-year old economic crisis, underscores the latest report of the Organization for Economic Cooperation and Development (OECD), which was presented to the Greek Prime Minister in Athens today by he organization’s Secretary-General Angel Gurría.
The Economic Survey of Greece says that poverty has risen significantly since the eruption of the debt crisis in early 2010 and affects more than one third of the population.
A targeted guaranteed minimum income scheme for poor households is due to be fully implemented in 2017 but the survey says further action is needed to tackle increasing rates of child poverty. Among its recommendations, the OECD says “a subsidised school meals programme should be introduced in poor regions. Establishing a social housing programme should be a medium-term goal, but in the meantime, well-targeted assistance is needed to tackle homelessness and the high cost of accommodation.”
Financing such programs would amount to around 1.5% of GDP.
The survey also highlights the need for more investment in infrastructure and logistics, which would “support exports which are essential to a sustained recovery. Liberalising further the network industries would also give the quality and quantity of investments a boost. EU structural funds should be used more effectively to increase investment in education, research, and innovation, as well as in information and communication technology to help improve skills.”
OECD’s report says “the adjustment process has so far depended too heavily on fiscal measures and labour markets while not enough progress has been made on product market reforms. Product market reforms, introduced since the crisis, have advanced only slowly, and have been undermined by weak implementation and largely left monopoly power in place. Enhancing administrative capacity, stronger ownership of the policy changes and clear communication about the expected benefits to the general public, would improve the effectiveness of the new reform programme.”
The report also notes that “tax evasion remains widespread in Greece, thus reducing revenues needed to support social policies. The OECD calls for a broadening of the tax base while the tax administration should be strengthened and given more autonomy, allowing it to free up resources for audits and improved enforcement.”
Nonetheless, the report sees signs that recovery prospects will strengthen in 2017 on account of the ongoing reforms. The report also stresses that “successful negotiations to address public debt sustainability are critical to improve the outlook.”
The report adds that “the refugee crisis could pose major problems for the Greek economy, particularly if the EU contribution turns out to be insufficient. Preliminary estimates put the cost of the influx of refugees at around 0.4% of GDP in 2015.”

Disney+ is currently developing a film based on the life of star Milwaukee Bucks basketball player Giannis Antetokounmpo.
Business