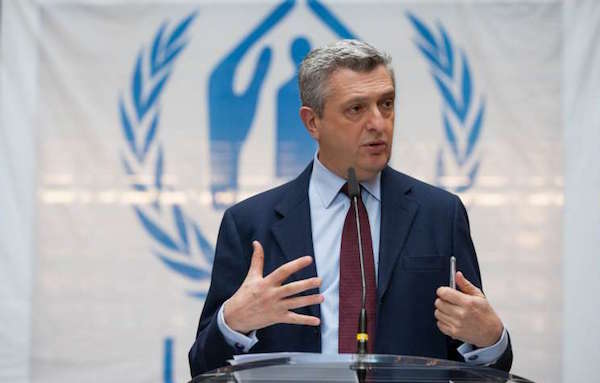 In a development that should surprise no one even remotely aware of international law and human rights, the United Nations has said that the tentative deal reached between European Union and Ankara over handling of migrant crisis may be illegal.
The deal is one whereby Turkey accepts illegal migrants in Europe in exchange for political and financial rewards.
“I am deeply concerned about any arrangement that would involve the blanket return of anyone from one country to another without spelling out the refugee protection safeguards under international law,” UN High Commissioner for Refugees Filippo Grandi told the European Parliament in Strasbourg.
Mr. Grandi was speaking hours after EU leaders outlined an agreement with Turkish Prime Minister Ahmet Davutoglu in Brussels that would grant Ankara an additional 3 billion euros to keep refugees in Turkey, faster visa-free travel for Turks, and expedited talks over Turkey’s accession to the EU..
In turn, Amnesty International labeled the proposed plan for the return of migrants a “death blow to the right to seek asylum,” while the international humanitarian organization Doctors without Borders said it was cynical and inhumane.
But Turkish PM Davutoglu insisted that the tentatively reached agreement between EU and Ankara would not stop Syrian refugees legitimately seeking shelter in Europe.
“The aim here is to discourage irregular migration and … to recognize those Syrians in our camps who the EU will accept – though we will not force anyone to go against their will – on legal routes,” he said at a meeting with Greek PM Alexis Tsipras in the Turkish coastal city of Izmir.
German Chancellor Angela Merkel, who sought to have a migrant deportation deal with Turkey before regional elections on Sunday, claimed that things were finally moving in the right direction after nearly a million Syrians, Iraqis, Afghans and others flooded into Germany alone last year.
Also of concern to human rights organizations and other people in general is the fact that the EU deal ignores political trends inside Turkey at a time when the Erdogan regime has shown complete disregard for democracy and freedom of speech, opting instead to rely on harsh authoritarian measures to impose its will and maintain control of the country.
(Sources: Reuters; The New York Times)