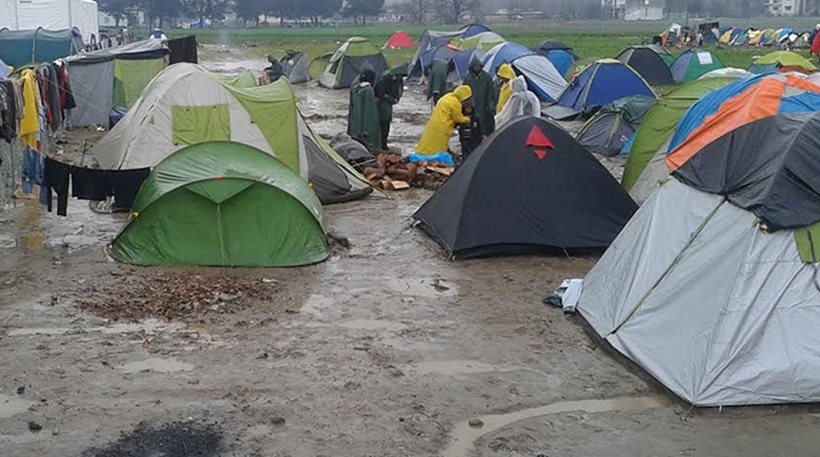 About 13,000 refugees are stranded under bad weather conditions at Idomeni as Slovenia and Serbia sealed their borders; the Greek government is considering the relocation of all refugees from the Greece-FYROM border.
Greek media describe the situation at the neutral zone between Greece and Former Yugoslav Republic of Macedonia as “chaotic.” The neighboring country has shut its borders after Monday’s European Union decision to close the “Balkan Route” for migrants.
Heavy rains have turned the ground into an endless muddy field with refugees and migrants having to fight the cold, malnutrition, bad hygiene conditions, stress, panic attacks, even reported miscarriages. Some refugees have turned one against the other fighting over food or a dry spot of land. Others went on hunger strike protesting the closing of the border.
Also, many migrants, distressed by the living conditions in the neutral zone decided to go back to Athens in order to stay at one of the refugee hospitality camps.
On the other hand, many migrants who are more optimistic continue to arrive at Idomeni in the hope that the FYROM border might open.
Slovenia and Serbia decided to shut their borders setting new restrictions. According to information, only those who want to stay in the country will be allowed to enter Slovenia and Serbia, while a small number of migrants will be allowed to cross the border for “humanitarian reasons.”
The Slovenian interior ministry announced that the country would accept a number of migrants for humanitarian reasons, but each asylum application will be examined individually.
Greek health authorities speak of health hazards caused by the unhygienic conditions and the lack of medications.
A German magazine report says that the Greek government is to evacuate Idomeni by Sunday. Der Spiegel cites statements by the head of the communication committee on refugee management Giorgos Kyritsis who said that the evacualtion will start as soon as 14 new migrant hospitality centers across Greece are ready.
35,945 refugees in the Greek territory, says Refugees Crisis Management body
Roughly 35,945 refugees are currently in Greece, according to the Refugees Crisis Management Coordination body figures released on Wednesday.
7,281 of then are on the islands of Lesvos, Samos, Chios, Kastellorizo, Kos, Leros and Kalymnos. 9,432 are hosted in the region of Attica.
Moreover, 160 are in a hotel in the region of Fthiotida, 2,200 at Diavata camp, 3,646 at the hosting center at Herso, Kilkis region, 3,256 at Nea Kavala in Kilkis, 800 at Nea Karvali, 200 in Eleftheroupolis and 420 in the city of Kozani. The refugees at Idomeni camp (Greek-Fyrom buffer zone) are approximately 8,550 refugees.