GRNews
GreekReporter.comGreeceTsipras: Aegean Must Become a Sea of Peace, Cooperation and Stability

Tsipras: Aegean Must Become a Sea of Peace, Cooperation and Stability 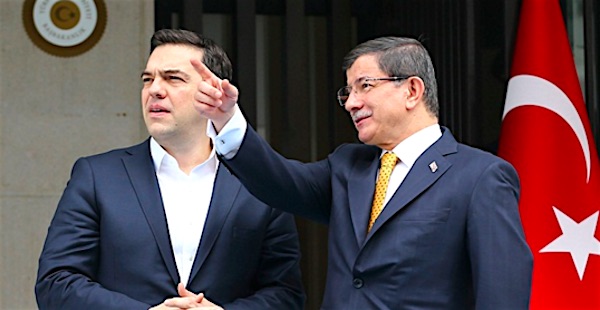 Neither Greece nor Turkey were the cause of the problems currently facing central Europe, Greece’s Prime Minister Alexis Tsipras said on Tuesday, during joint statements with his Turkish counterpart Ahmet Davutoglu in Izmir. We will solve the problems of the refugee crisis together and no one will impose a solution upon us, the Greek premier added.
“The Aegean must become a sea of peace, cooperation and stability,” Tsipras said. With sophisticated technology at their disposal, he noted, an inability to find the traffickers bringing refugees to Europe was not acceptable. The future of relations between Greece and Turkey had to negotiate major challenges, one of which was dealing with the refugee crisis, he added.
“We state together that what is happening in our sea is shameful for our culture. We must strengthen our relations, overcome mutual problems and build a better future for our people,” Tsipras said.
The Greek prime minister also referred to the Cyprus issue and the increased number of airspace and other violations by Turkey in the Aegean, noting that this was not compatible with cultivating a good atmosphere in relations between the two countries.
Tsipras is in Izmir for the 4th High-Level Cooperation Council that focused on trade, transport and tourism, which ended with the signature of bilateral agreements. He is at the head of a large government delegation of 10 ministers and representatives of 36 Greek businesses and organizations.
PM Davutoglu to Tsipras: “We’re seeking solutions to end the drama at sea.”
Greece and Turkey are sharing the burden of the refugee crisis, the Turkish prime minister said during the joint press conference, noting that Greece has been affected by the problem.
He said the two sides are seeking solutions that will reduce refugee flows in the Aegean and end the dramatic situations at sea. “”We will all have to share the burden of the refugee crisis,” Davutoglu said.
(source: ana-mpa)