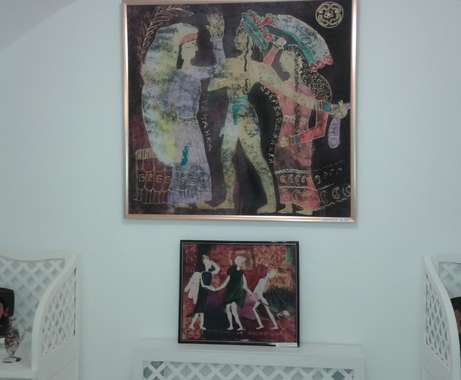 An art exhibition entitled “Hellas” in the Centro Italiano Baku has opened its doors for little art lovers until March 11, featuring art by children inspired by Ancient Greece, according to a Azernews report.

The theme of the exhibition is children’s artwork inspired by Ancient Greece, the cradle of European civilization. Under the guidance of Galina Nikolayevna Churilova, students of Children’s Studio of Ecological Posters of the Tofig Ismayilov Children and Youth Creativity Centre have studied the ancient Greek art and embodied this knowledge to paintings, graphic arts, batiks and pottery. More than 150 pieces of made by 28 students, from 5 to 15 years old.

The event is organized by the Embassy of Greece in Azerbaijan in cooperation with the Greek Community ARGO and Centro Italiano Baku.

The opening was introduced by Paola Casagrande, the director of the Italian Center Baku and followed by the welcoming speeches of Dimitrios Tsoungas, Greek Ambassador to Azerbaijan, Portnova Nadejda Petrovna, Deputy Director of the Tofig Ismayilov Children and Youth Creativity Centre and Mrs. Churilova Galina Nikolayevna, director of the project.

The children presented their inspired and colorful batik costumes accompanied by Greek music, which attracted everybody’s attention. At the end of the event, all students, as well as the School and the project director were awarded with a Certificate of Achievement and Excellence for their great art performance inspired by Greek civilization.