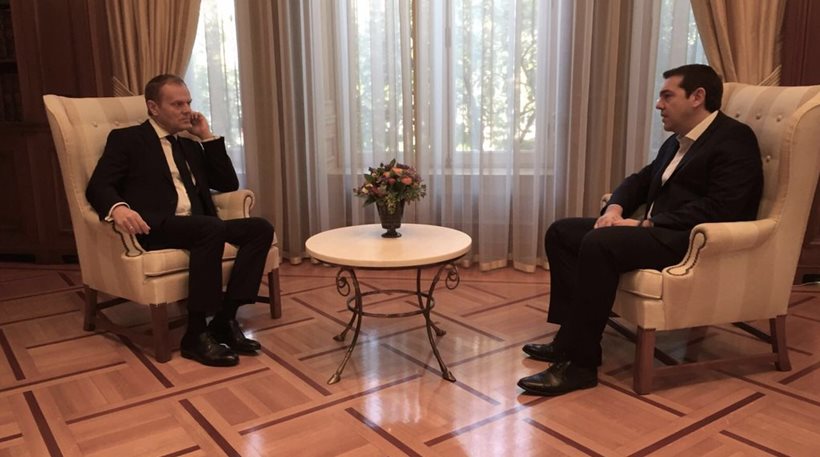 Greece cannot shoulder the refugee burden on its own and Europe must show solidarity, Prime Minister Alexis Tsipras said on Thursday.
The Greek prime minister talked to the press after his meeting with European Council President Donald Tusk in Athens. The European Union official reiterated Tsipras’ comment saying that unilateral actions by member states hurt solidarity and must stop. The two men met ahead of Monday’s crucial extraordinary EU summit on the refugee crisis.
“Greece will demand that all countries respect the European treaty and that there will be sanctions for those that do not. We ask that unilateral actions stop in Europe,” Tsipras said.
Tsipras said Greece would continue to do whatever it can to ensure that no migrant or refugee would be left helpless but cannot bear the burden alone.
“We will not allow Greece or any other country to be turned into a warehouse of souls,” Tsipras said. “We are at a crucial moment for the future of Europe.”
“We will make every effort to apply the Schenghen treaty and the Geneva convention. We will not push back people in the sea, risking the lives of children.”
The Greek prime minister also called for financial aid in tackling the humanitarian crisis. “Greece needs funding to build the infrastructure and hire the necessary personnel. We need humanitarian aid supplies and equipment. We need to ensure that assistance and funding will be given at fast rates on the basis of assessment by Greek authorities.”
Tusk: We will restore the Schengen agreement in Europe
The European Council president said that the Schengen treaty will be restored and that Greece will not be abandoned by its EU peers.
Tusk said that Greece has suffered more than any other country because of the refugee crisis. Pushing Greece out of the Schengen zone will not solve the problem.
“Unilateral actions, although perhaps they can be understood in a country’s interior, but do much harm to European solidarity, “he said.
Respecting the rules is not sufficient to solve the crisis, but without rules there is no hope, Tusk pointed out.
Addressing economic migrants who are thinking of going to Europe, The EU official said: “From here in Athens, I appeal to all migrants: do not come to Greece, Greece is no longer a transit country. Do not trust human traffickers, you will lose your money. Rules will be reactivated.”
At the same time, Tusk said that Europe will offer more support to refugees who need help.