GRNews
GreekReporter.comGreeceAustria and 9 Balkan States Reach Refugee Agreement at the Expense of... 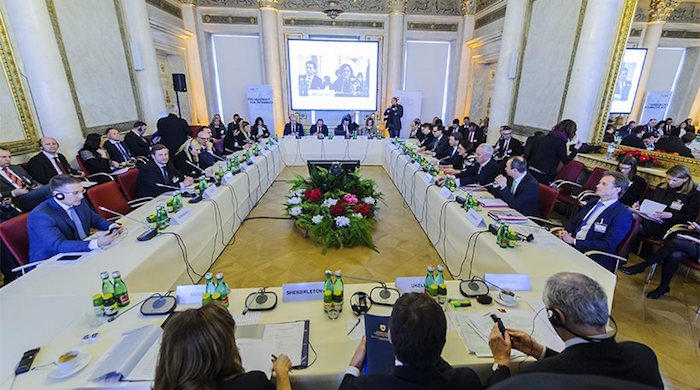 Following an initiative taken by the Austrian government that has raised eyebrows among EU officials and infuriated Greece as Athens did not receive an invitation to participate, Austria and nine Balkan states held a meeting in Vienna today to address the refugee and migrant crisis in Europe, effectively taking measures of their own as Brussels has been incapable of providing an effective solution to an unprecedented displacement crisis.
The ten foreign and interior ministers that attended today’s meeting have agreed on several measures to halt the influx of refugees and migrants coming from Afghanistan, Iraq, and Syria.
Among the measures is an agreement in allowing — the ten countries in question — only those who are in need of “international protection.”
Essentially, the agreement excludes Afghans and all those who seek entry to Europe for economic reasons, i.e., in order to improve their lives.
The parties at the meeting also agreed on the type of documentation that refugees would need in order to register in their countries.
In addition, they agreed to provide support to FYROM as the county’s border with Greece has become lately the focal point for people trying to make their way to the core of the continent.
Austria would send to FYROM an additional 20 police officers, and other countries such as Hungary, Slovakia, and Poland also committed themselves to providing assistance to FYROM in its effort to seal off a major section of the Balkan route to Europe.
In the meantime, Hungary has announced that it will hold a referendum on whether the country should abide by European decisions regarding refugee policy.
“It is not possible to process unlimited numbers of migrants and applicants for asylum,” said a declaration issued by the meeting, which included European Union members — Austria, Bulgaria, Croatia and Slovenia, as well as Albania, Bosnia, Kosovo, FYROM, Montenegro and Serbia. The document cited “limited resources and reception capacities, potential consequences for internal security and social cohesion as well as challenges with regard to integration.”
Austria has already capped the number of asylum applications it would accept each day, after having its borders open to Syrians and others who were stranded in Hungary.
“We have to reduce the influx now,” said Ms. Mikl-Leitner, Austria’s interior minister. “This is a question of survival for the European Union.”
Austrian official also criticized Germany’s policy towards refugees, saying that Berlin advocates a so-called “open door” refugee policy, but asks Vienna not to send refugees to Germany.
The decisions reached today in Vienna will intensify the refugee pressure on Greece, and it is uncertain how the Athens will respond to today’s outcome.
Prime Minister Alexis Tsipras said that from now on Greece “will not assent to agreements” unless all its partners in the EU are forced to participate proportionately in the relocation and resettlement of refugees.
In all likelihood, however, Greece will be converted into a huge “open-air” refugee camp with unforeseen political and social consequences.