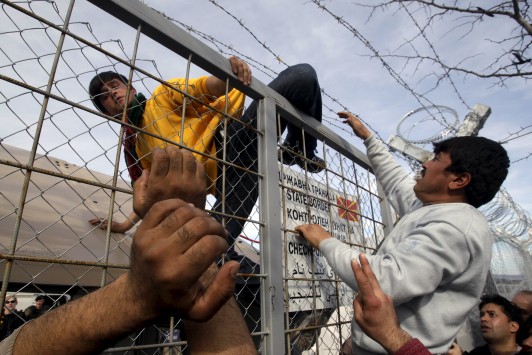 A group of about 150 Afghan refugees and migrants occupied the train tracks in Idomeni in recent hours. The group took down the wire fence along the tracks of Idomeni in order to protest the ban to enter the neutral zone. The protesters sat on the tracks, claiming to be determined to not back away if they are not allowed to continue their journey.
The police in the FYROM borders are not allowing any Afghan refugees to pass through the neutral zone between Eidomeni and Gevgelija for the second day, whereas about 700 Afghan refugees have been trapped in the FYROM-Serbian borders, as Serbia does not allow them to enter its territory.
The Minister of Foreign Affairs of the Republic of Macedonia, Nicola Poposki, in a meeting with journalists at Skopje, mentioned that about 700 Afghan refugees will remain in the camp that is located in the FYROM-Serbian borders, until Croatia and Serbia reach an agreement regarding the passage of Afghan refugees. Poposki also mentioned that the Afghan refugees cannot continue their journey towards the North, as Croatia is not allowing them.