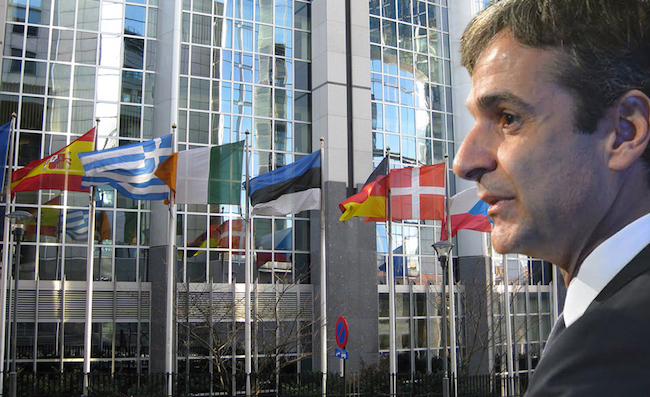 New Democracy (ND) leader Kyriakos Mitsotakis had a series of meetings this week in Brussels with European leaders, including German Chancellor Angela Merkel. Mitsotakis was in Brussels to attend the European People’s Party (EPP) meeting and used the occasion to inform EU leaders of his party’s platform on the refugee crisis and the economy.
Following his meeting with Angela Merkel, Mitsotakis said that the interests of Greece and Germany converge on the refugee issue and agreed that the borders must not be closed.
Mitsotakis, however, clashed verbally at the EPP meeting with Austrian Vice Chancellor and Chairman of the Austrian People’s Party Reinhold Mitterlehner who insisted that the only way to halt refugee flows is to close Greece’s northern borders. Austria has sided with the Visegrad group on the question of border controls and has formally asked the government of FYROM to shut its borders so refugees will not find their way to the core of Europe.
ND’ leader Mitsotakis told delegates at the EPP meeting that “Greece’s borders are European borders. You cannot transfer Europe’s borderline – which is now at the Aegean – to FYROM.”
Mitsotakis also made it clear to European leaders that he met with in Brussels that the fact that his party’s position on refugees converges with that of the Syriza-led government does not mean that there will be a common front between ND and the Tsipras government on policy in general.
For example, ND stands firm on the need for economic reforms in Greece but will not support in parliament the reforms proposed for the nation’s pension system, said Mitsotakis.