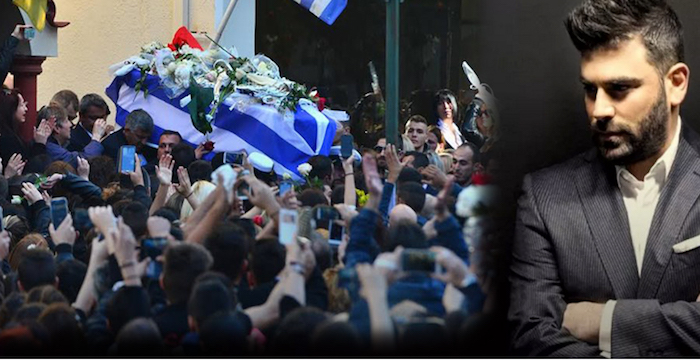 Today, a rising musical icon was laid to rest.
The gone-to-soon, Pantelis Pantelidis was honored in a funeral ceremony at the church of Agios Spyridonas in Nea Ionia, where hundreds of fans as well as colleagues, friends and family came to say good-bye.
According to Prothema.gr among the people who paid their tribute to Pantelidis were Antonis Remos with his partner Yvonne Bosnjak, singers Kostas Martakis, Despina Vandi, Giorgos Mazonakis, Tamta, Foureira, Natassa Theodoridou, Vassilis Karras; singer Kostas Piladakis and his partner Irene Papadopoulou, actress Doretta Papadimitriou and Pantelidis’ ex-partner and singer Maria Georgakaki, for whom Pantelidis wrote many songs.
Pantelidis, one of Greece’s most popular young singers, was killed in a car crash, as a result of massive injuries, on Thursday morning.
Unfortunately, the 32-year-old singer took his last breath after crashing his car while driving on Vouliagmenis avenue in Glyfada where he lost control of the vehicle at 8:20 a.m.
Pantelidis was driving an SUV along with two female passengers. According to eye witnesses, the car was driving at high-speed when the driver lost control of the vehicle and crashed into the road barriers. The female passengers did not lose their lives but were last known to be in hospital in serious condition.
Pantelidis was scheduled to start a series of live performances on Friday along with popular singers Despoina Vandi and Costas Martakis. Reportedly, only a few hours before the accident he was rehearsing at the nightclub.
Before becoming a YouTube sensation and later a recording artist and live performer, Pantelidis was serving in the Greek Navy. The self-taught singer/songwriter became known in 2012 when he started appearing on YouTube singing his songs and playing acoustic guitar. His videos became viral and his career skyrocketed within a short period of time.
Even after he became a successful musician. He had a close relationship with his family, and especially with his mother, Athena.
Thousands of fans are also reportedly set to gather in tribute on Saturday night at 7 p.m. at the scene where the singer lost his life. The call was organized through social media, to give fans a chance to leave flowers in his memory and honor Pantelidis with a moment of silence.