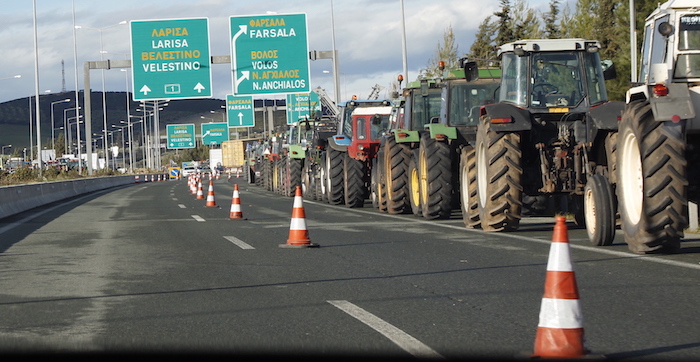 Greek farmers have left Athens after massive protest rallies outside the Greek Parliament during the weekend and returned to the roadblocks on national highways across Greece.
Farmers protest against proposed security fund and tax reforms that affect their sector. They demand the omnibus bill to be withdrawn and start a dialogue with the Greek government from scratch.
The farmers at the Tempi Valley blockade in central Greece closed the motorway again at noon on Sunday, saying their protest will continue indefinitely, while more groups of protesters announced new actions for next week.
Tempi Valley had remained open over the weekend so that protesters could attend the demonstartion in the Greek capital. Farmers at Tempi, along with their colleagues at Mikrothives, central Greece, are still expecting an invitation from the government on the proposals they submitted last week with improvements to the bill.
Further north, in the region of Rodopi, farmers announced they will close the Greek-Bulgarian border crossing at Nymphea for 72 hours as of Monday. This means that for three days no cars or trucks will be able to cross from Greece into Bulgaria and vice versa.
In Xanthi, northeastern Greece, farmers announced they will close the bridge at Nestos River, on the Egnatia Highway for seven hours as of Monday noon and until 17.00 , according to statements made to ANA-MPA by the representative of the roadblocks in the region, Kostas Dalatsis.
Farmers jeer at SYRIZA MPs in Alexandroupolis and Kozani
On Sunday, dozens of angry farmers gathered outside the Kozani Region main offices while four SYRIZA lawmakers were holding a press conference inside the building.
Farmers’ representatives asked for permission to enter the courtyard of the premises in order to protest. According to a farmer who spoke on Mega television, about 10-15 people in civilian clothing blocked the entrance to the building and did not allow farmers to enter in protest.
Finally, a representative was allowed in the building to present a written complaint to the lawmakers. When the four members of parliament left the building, they were met with obscene jeers, insults and threats.
On Saturday, farmers from Alexandroupolis, northeastern Greece, jeered at two local SYRIZA MPs and wouldn’t let them come out of the airport where they landed.
The protesters called the ruling party MPs names such as “crooks”, “thieves”, “liars”. They threatened them by saying that next time they want to fly to Alexandroupolis, they won’t allow them to land on the airport.
A similar incident took place in Florina, northern Greece, on Sunday. Protesting farmers verbally attacked SYRIZA lawmakers from the area. This time the MPs were protected by riot police.