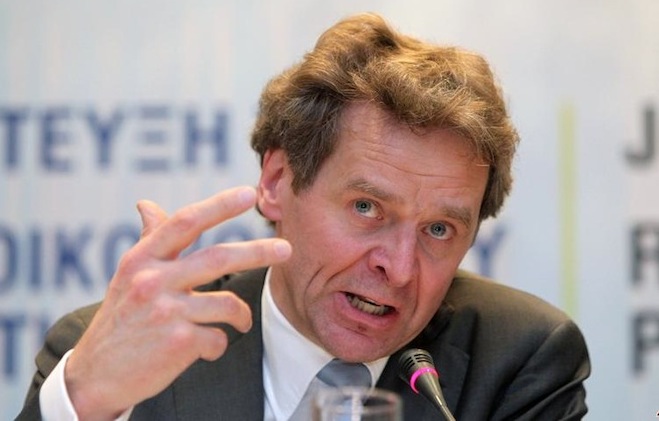 Greece needs to make pension cuts in order to make the security funds system sustainable in the long run, says the International Monetary Fund.
Poul Thomsen, the Deputy Director of the Fund’s European Department who handles the Greek bailout, says that the Greek pension system is “unaffordably generous” and only pension cuts can make the security funds system sustainable.
In an article entitled “Greece: Toward a Workable Program” posted on the IMF official blog on Thursday, the Danish economist denies the criticism that the Fund is pushing for “socially draconian reforms”. He counter-argues that in Greece pensions cost about 10 percent of gross domestic product every year when the average in the Eurozone is 2.5 percent. Only deep pension reforms can make the pension system sustainable:
“Why the focus on pension reforms? Despite the pension reforms of 2010 and 2012, Greece’s pension system remains unaffordably generous. For instance, the standard pensions in nominal Euro terms are broadly similar in Greece and Germany, even though Germany—measured by the average wage—is twice as rich as Greece. Add to this that Greeks still retire much earlier than Germans and that Germany is much better at collecting social security contributions. The result is that the Greek budget needs to transfer some 10 percent of GDP to cover the gaping hole in the pension system, compared to a European average of some 2½ percent. Clearly, this is unsustainable,” he writes.
Thomsen disagrees with the Greek government’s proposals to keep pensions as they are and increase taxes and contributions. He argues that would be a short-term measure that will not solve the problem and deter growth at the same time.
“Most other spending has already been cut to the bone in an effort to protect pensions and social payments, while the failure to broaden the base and improve compliance has already caused too much reliance on high tax rates. To reach its ambitious medium-term target for the primary surplus of 3½ percent of GDP, Greece will need to take measures in the order of some 4-5 percent of GDP. We cannot see how Greece can do so without major savings on pensions,” Thomsen argues.
However, Thomsen says that in order for Greece to get out of the slump and get on the path for growth, along with pension cuts and other measures a debt relief is equally necessary:
“No amount of pension reforms will make Greece’s debt sustainable without debt relief, and no amount of debt relief will make Greece’s pension system sustainable without pension reforms. Both need to come about. There is no doubt that both Greece and its European partners will face politically difficult decisions in the coming months to arrive at a program that is viable—one that adds up,” he writes.
And Thomsen’s assessment concudes: “The overriding objective of the IMF’s engagement with Greece is to help the country put itself back on a path of sustainable growth that benefits the Greek people. The IMF will support the Greek authorities and their European partners in developing a program of reforms and debt relief that adds up. There are difficult choices to be made, but it is important to make them so that Greece’s efforts over the last six years are not wasted.”