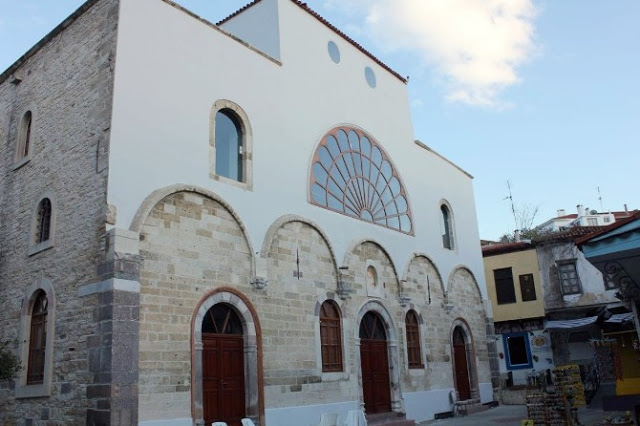 Ecumenical Patriarch Bartholomew performed a liturgy at the recently renovated Greek Orthodox church of Saint Charalambos in Krini (Cesme), Turkey, on Wednesday, February 10, 2016. This is the first time that a Divine Liturgy has been performed in the church, after the local authorities issued the necessary licenses.

The Ecumenical Patriarch performed the liturgy along with the Bishop of Chios and the Bishop of Adrianople. Furthermore, numerous believers from the Greek island of Chios arrived in the city in order to participate in the Divine Liturgy.

The Patriarch was warmly greeted by the local authorities.

The metropolitan church of Saint Charalambos in Cesme was built in 1832, following the three-aisled basilica style with a raised nave and a capacity of 3,000 people. The church has 12 columns made from red marble, separating the aisles, which are dedicated to the Virgin Mary and Saint Stefanos.

In September 1922 thousands of women from Cesme, Agia Paraskevi, Kato Panagia and the surrounding villages found refuge in the church, while they were waiting to board the ships. The temple was restored between 2011 and 2014.