Why Varoufakis’ DIEM25 Will Fail to Produce Change in Europe 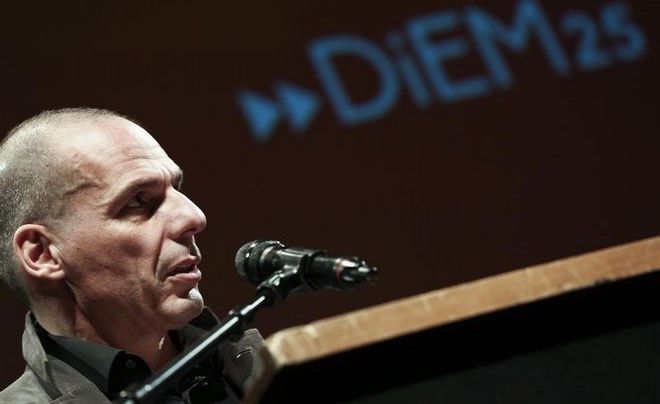 Former Greek Finance Minister Yanis Varoufakis has launched a new political movement, DIEM25, a pan-European movement for democracy with the aim of democratizing Europe.
The launching of DIEM25 took place yesterday at Berlin’s Volksbühne theatre and featured speeches from Barcelona’s mayor, Ada Colau, British Green MP Caroline Lucas, representatives of Germany’s Blockupy movement, philosopher Slavoj Žižek and WikiLeaks founder Julian Assange.
It is interesting to note the absence of Greek intellectuals and public figures from Varoufakis’ ambitious undertaking to save Europe before it is too late, as he is accustomed to saying.
Varoufakis’ idea for the launching of a pan-European movement to democratize Europe stems from his direct participation in negotiations talks with European Union officials over Greece’s debt crisis.
As he has said repeatedly in endless interviews to the media, he was shocked by the disregard for democracy he experienced among EU officials, who felt that democracy has no role in the making of economic policy, although he was aware of the fact that EU institutions and the European Central Bank were established as “democracy-free zones.”
In a recent interview he gave to Red Pepper in the UK, Varoufakis put his experience as Finance Minister in dealing with Greece’s creditors this way: ”We were elected to challenge the Troika of creditors and it was at that point the Troika asserted quite clearly that democracy cannot be allowed to change anything.”
And he continues as follows: “I was astonished to hear the German finance minister say to me, verbatim, that elections cannot be allowed to change established economic policy. In other words, that democracy is fine as long as it does not threaten to change anything! While I was expecting that to be the overall motif, I was not prepared to have it spelled out so bluntly.”
Varoufakis’ purpose for launching DIEM25 is not to undue the European integration experiment, but to rescue it. Indeed, convinced that there is no return to the nation-state as a way for European societies to manage their economic and social affairs, he feels that the European Union will be democratized, or it will disintegrate.
Varoufakis’ vision is in broad line with the political philosophy tradition which sees the role of the demos as essential and critical for the advancement of social rights, freedom, and equality.
In this context, DIEM25 aims to challenge technocratic Brussels and transfer the rule of Europe to people’s hands.
Varoufakis claims that the goal of democratizing Europe is urgent, or Europe will crumble. And he thinks that current Europe has no more than a decade left, hence the reference to 2025.
The movement’s manifesto points out that “rules should exist to serve Europeans, not the other way around” and that “currencies should be instruments, not ends-in-themselves.”
In terms of what needs to be done immediately in connection with saving Europe, the manifesto for the “Democracy in Europe Movement 2025” underlines “full transparency in decision-making” across EU institutions and power centers.
For the next twelve months, the aim is to address the current economic crisis by utilizing existing institutions.
As the manifesto points out, Europe’s current crisis “is unfolding simultaneously in five realms: public debt, banking, inadequate Investment, migration, and rising poverty.”
And it adds that “all five realms are currently left in the hands of national governments powerless to act upon them,” adding that “DiEM25 will present detailed policy proposals to Europeanize all five while limiting Brussels’ discretionary powers and returning power to national Parliaments, to regional councils, to city halls and to communities.”
According to the movement’s manifest, the next step to be realized within the next two years is the establishment of a “constitutional assembly,” that is, the transformation of Europe “into a full-fledged democracy with a sovereign Parliament respecting national self-determination and sharing power with national Parliaments, regional assemblies and municipal councils.”
The ultimate aim, according to the manifesto, is the “enactment of the decisions of the Constitutional Assembly by 2025.”
Like all manifestos, the one produced by Varoufakis and his close associates for DIEM25 is long on generalizations and short on specifics.
It comes across as a political scheme built on postmodern concepts, an empty repository of political sloganeerism.
Who will carry out the changes advocated in the movements’ manifesto? Academics, philosophers, and artists?
For an alleged “erratic Marxist,” Varoufakis’ manifesto is silent on strategies of class struggle to overcome the inherent deficiencies in the European integration project, which is highly elitist and anti-democratic.
To be sure, the movement’s manifesto is suspiciously silent on political economy issues in general. There is nothing in it that even hints towards an alternative political economy for Europe.
No doubt, Europe is coming apart at the seams and European people need a vision of a better future.
However, the extent to which common, working-class people in Europe will be drawn to Varoufakis’ project is highly doubtful. As conceived, DIEM25 will most likely appeal to academics and intellectuals of the social democratic tradition and encounter apathy among the rest of people in Europe.