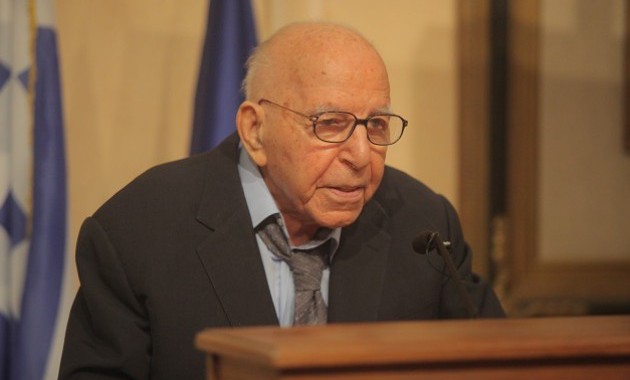 Prominent Greek academic, philosopher and politician Konstantinos Despotopoulos passed away on Sunday, one day before his 103rd birthday.
Despotopoulos was born in Izmir on February 8, 1913.  After the Asia Minor Catastrophe in 1922, his family migrated to Athens. He studied law at Athens University where he received his doctorate.
He taught Philosophy and Philosophy of Law at Athens University, University of Nancy, France, and the Panteion University of Athens.
He served twice as Minister of Education, in 1989 under the Ioannis Grivas administration and in 1990 during the short term of the Xenophon Zolotas government.
Despotopoulos received medals of honor, by the Presidents of the Republic of Greece, France and Italy. He became President of the Academy of Athens in 1993.
He has written 32 books on philosophy, history and politics, and novels. The “Philosophy of Law” has served as the basis of Greece’s restructured legal system.
His diatribes on the philosophy of Plato and Aristotle are exemplary. He has also written important books on the dangers Hellenism is facing and the survival of the Hellenic nation.
Other well known works of Despotopoulos are Eulogy of Philosophy,” “About Persons and Institutions,” “Absent Fame,” “Philosophy and Cultural Theory,” as well as books in French such as “Grece 1821-1971, “Etudes sur la Liberte,” “Aristote sur la Famille et la Justice,” “La Philosophie Politique de Platon.”
Despotopoulos fought with the Greek resistance forces during the German occupation (1941-1944). In 1947 he was dismissed from his teaching position at the Athens University and was exiled to the island of Makronissos until 1950 for his leftist political beliefs.
His views on life, society and politics have been quoted repeatedly. He passed away on February 7, 2016, one day before his 103rd birthday.