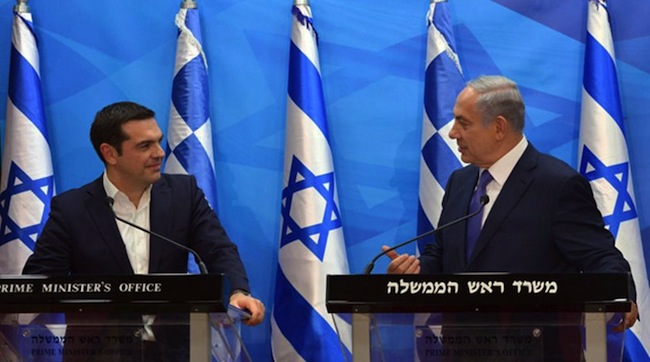 Only a few months before it’s rise to power, Tsipras’ Syriza party was attacking Israel’s “criminal” policies towards Palestinians. Today, Greece’s Syriza-led government has established a cozy relationship with Netanyahu’s Israel, thereby adding yet another chapter to Tsipra’s pre-election lies and Machiavellian manipulation of Greek public opinion.
To be sure, since the return to parliamentary democracy no other Greek government has established such close relations with the state of Israel as the current one. But to what end? This is the million dollar question.
The recently held second G2G (Government to Government) meeting between Greece and Israel in Jerusalem had as its primary aim the strengthening of strategic bilateral relations between the two countries on countless of issues, ranging from foreign affairs to economic cooperation and the war on terrorism.
In all likelihood, the warm-up in diplomatic relations between Greece and Israel is taking place with Washington’s encouragement and support in the light of the highly volatile state of affairs in the Mediterranean region, which includes Turkey’s aspirations for peripheral hegemony.
In doing so, however, Tsipras’ Syriza-led government is taking on a risk clouded with great uncertainty about any potential benefits for Greece while providing legitimacy at the same time to an apartheid state that has been condemned countless of times in the UN for its vicious policies against the Palestinian people.
But this is apparently no longer a concern for the pseudo-leftist Greek government. Indeed, indicative of Tsipra’s U-turn on virtually all issues since elected to power, while in Israel he expressed his deep concern over attacks on Israeli citizens — as if the Palestinian people are the aggressors and Israel the victim.
The latter development prompted a noted Palestinian politician to wonder out loud in an Op-Ed on an Israeli newspaper whether Greece under the Syriza government is about to betray the Palestinian cause.
What Greece will gain from Tsipras’ love affairs with Israel is, again, hard to gauge. For example, the strengthening of the relationship will surely not have an effect on Greece’s concerns over Turkish aggression in the Aegean.
Speaking about the warm-up in Greek-Israeli diplomatic relations during Greek PM’s visit In Tel Aviv,  Netanyahu was quick to stress that the strengthening of relations between Greece and Israel “do not come at the expense”  of Turkey. In fact, both Turkey and Israel are at the present in a process of ending their thawed relations caused a few years ago by Erdogan’s verbal attacks on Israeli policy towards Palestinians.
Greek PM Alexis Tsipras needs to explain to the Greek people his sudden love affair with Netanyahu’s Israel as well as the moral questions raised by this affair.