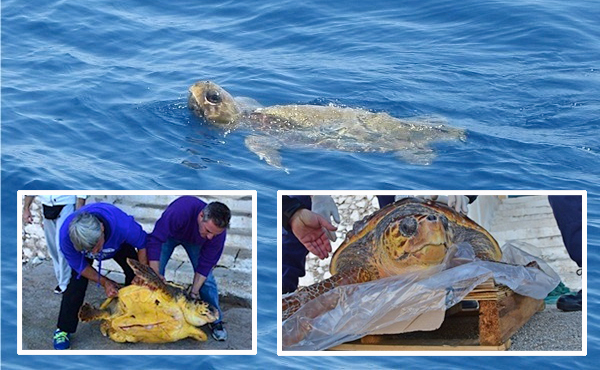 Residents in the picturesque coastal town of Nafplio, in east Peloponnese, Greece, on Friday rescued another endangered Caretta caretta sea turtle that was found injured and unable to swim near the beach of Karathonas. This was the second such incident recorded near Nafplio.
The turtle had been seriously hurt in its ventral shell or “belly,” which had been pierced by some sharp object along its length. It was unable to swim and was found floating on the surface of the water, near the shore. The people who spotted the turtle were able to catch it and bring it ashore, where they alerted the Nafplio coast guard to collect it.
After administering first aid, coast guard officers then sent the turtle for further treatment to the sea turtle protection society Archelon.
(source: ana-mpa)