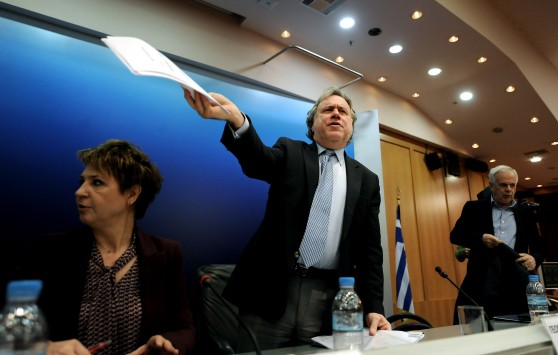 As the country is at present in the grips of strike over the government’s plan to proceed with further cuts in pension benefits and impose additional austerity, senior level government officials are pulling all the stops to reassure angry citizens that what the government does is for their own good.
Among other ministers, the irrepressible Minister of Labor, Social Insurance, and Solidarity George Katrougalos, sought today to convey a message to the nation’s farmers, who are presently blocking traffic on major roads over planned tax and pension, by saying that the government’s goal is to assure that there is a pension system in place for the present and future generations.

He also said that his government does not want to have the nation’s farmers treated as second class citizens, a situation which will be rectified by the plan for a unified Greek pension system.
No doubt, Greece’s pension system is in throes of collapse and in dire need of reform. The reform measures proposed may end up rescuing the pension system from complete collapse, but will leave present and future retirees with meager retirement benefits, while 45% of Greek retirees are already under the poverty line.
As George Soros said on Bloomberg from Davos’ World Economic Forum, there is a visible solution for Greece. And there is none for two reasons…
Firstly, because Europe’s elite are not willing to take the necessary measures to end the Greek crisis. And, secondly, because while an active citizenship might be able to offer a way out of the crisis with citizens taking the future of the country into their own hands, the irony of the matter is that the great majority of Greeks seem to be more terrified of a radically alternative path to the present situation than the present situation itself!