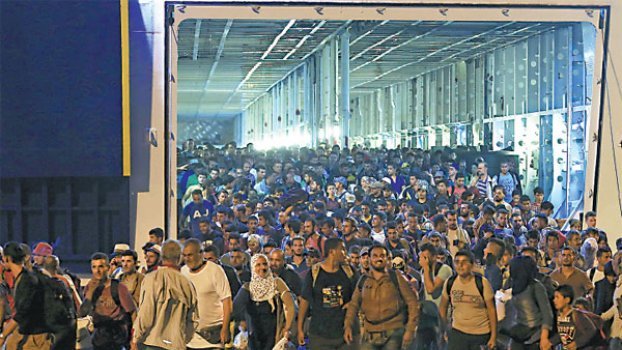 The fiscal cost of refugees to Greece was 300 million euros, or 0.17% of GDP, according to an International Monetary Fund report.
The two European countries that suffered the highest fiscal costs due to the refugee influx in 2015 were Sweden (0.5% of GDP) and Denmark (0.47%), according to the report.
Slightly higher than Greece’s were the costs of Germany and Italy (0.20 % of GDP in both countries) and the Netherlands (0.18% of GDP).
In contrast, very low are the costs of Spain, only 0.006% of its GDP.
The report does not provide an estimate for 2016, but notes that the short-term costs of caring for asylum seekers may be important in some European countries.
The IMF estimates that the weighted average (based on GDP) expenditure on the budgets of EU countries may grow by 0.05% of GDP in 2015 and 0.1% of GDP in 2016 compared to 2014.
The estimates are very indicative, the report notes, mainly because of uncertainty about the number of asylum seekers. In Austria, expenditure is expected to reach 0.31% of GDP in 2016, in Finland 0.37% of GDP in Denmark to 0.57% of GDP in Sweden to 1% of GDP.
In Germany, expenditure will reach 2016 to 0.24% of GDP, and in Italy, and the Netherlands will be slightly smaller (0.23% of GDP).
The initial macroeconomic impact of the influx of refugees seeking asylum will be through increased aggregate demand, the report notes, while the results from the increase of the labor market will occur gradually.
Only a small part of the direct budgetary costs are covered by the European Union budget, the report said. In September 2015, the European Commission proposed to increase the budget for refugees in 2015-16 by 1.7 billion euros, reaching 9.2 billion euros.