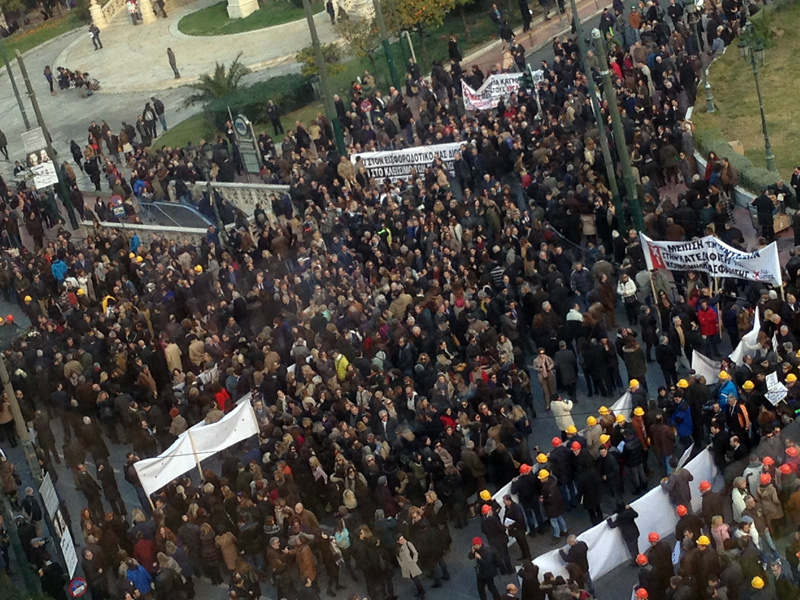 Thousands of Greek professionals and freelancers took it to the streets on Thursday protesting against the government’s planned security funds reform.
About 7,000 lawyers, engineers, doctors, solicitors, pharmacists, tax accountants, architects, small business owners and dozens of other freelance workers gathered outside the University of Athens administration building on Panepistimiou Street at 11.30 am.
The protesters marched towards the Greek Ministry of Labor, Social Security and Social Solidarity before heading to Greek Parliament at Syntagma Square.
Protesters say that the government bill on social security lacks credibility and is both dangerous and non-viable. The organizers of the strike action say that they will continue their protest to pressure the government to withdraw the bill.
The Athens Bar Association President Vassilis Alexandris highlighted the ambiguity of the bill that forces lawyers with income from zero to 5,000 euros per annum to pay 2,823 euros in security fund contributions.
Alexandris noted that apart from social security contributions, lawyers are also obligated to pay 26% income tax and 23% value added tax. In addition, they have to pay the income tax in advance at the beginning of each year.
Workers at municipalities and some doctors from the Greek National Organization of Healthcare Services (EOPPY) are also hosting stop-work action for four hours from 11 am to 3 pm.
Major streets and avenues in central Athens are closed to traffic since demonstrators were still at Syntagma Square shouting slogans at the Greek Parliament at 2:30 pm.
Meanwhile, protesting farmers and stockbreeders have used their tractors to block major highways all over mainland Greece and on the major islands of Crete and Rhodes.