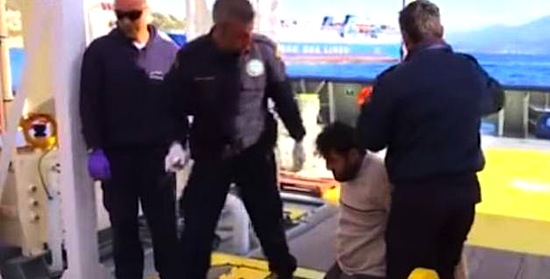 A Turkish captain of a smuggler boat which capsized off the coast of Agathonisi killing three Syrian children under five years of age that were aboard, has been arrested by Greek authorities on the island of Samos.
Turkish smugglers are luring refugees eager to get to Europe onto crumbling boats. The journey across the Aegean from Turkey to Greece often enough proves fatal for refugee families and their children.
The Turkish smuggler faces charges of manslaughter and causing a shipwreck. The Greek authorities that arrested him forced him to look at the dead children’s bodies.
Turkey has become a major migration route for refugees from Syria and other parts of the region, and it is the responsibility of the Turkish government to put an end to human trafficking. Turkey however is failing to do so, and the lax attitude on the part of the European Union authorities towards Turkey’s inability or unwillingness to take drastic measures on human trafficking only makes matters worse.