GRNews
GreekReporter.comGreek NewsEconomyTsipras: 'This is the First time Greece Will Utilize Information on Tax...

Tsipras: 'This is the First time Greece Will Utilize Information on Tax Evasion' 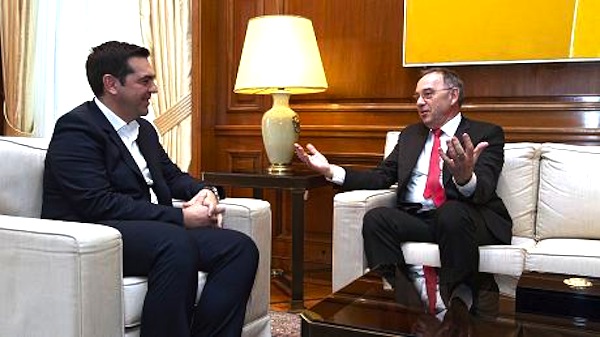 The Greek government will use the bank data provided by Germany to tackle tax evasion, Prime Minister Alexis Tsipras said after a meeting with the Finance Minister of the State of North Rhine-Westphalia Norbert Walter-Borjans.
Greece recently received a list of Greek depositors with large accounts at Swiss bank UBS from the German state of North Rhine-Westphalia, known as the “Borjans list,” after its Finance Minister who delivered it.
Welcoming Walter-Borjans at the Greek government headquarters, Tsipras thanked him for his help in the fight against tax evasion and described the information received as “important.”
“It is not the first time that Greece has received information and lists, but it is the first time that Greece has information on tax evasion and is utilizing it,” the Greek Prime Minister said. “After the ‘Lagarde list,’ we have the ‘Borjans list.’ You are famous in Greece,” he added.
On his side, Walter-Borjans discussed the experience accumulated by North Rhine-Westphalia during the 2008-2009 crisis and how such lists were utilized to increase revenue.
“It would be advisable to utilize such lists and not just cut expenses,” the German official said when he heard Tsipras say that the Greek government is discussing with the institutions about the revenues that could derive from tackling tax evasion.
“Many people have lost their sleep because of the government’s efforts to fight tax evasion,” Tsipras commented.
Walter-Borjans: ‘Tsipras really wants to fight tax evasion’
Tsipras seems really intent on stamping out tax evasion, Walter-Borjans told the Athens-Macedonian News Agency in an interview published on Sunday.
Asked by the news agency if the German official got the impression that Tsipras really wants to tackle the problem, he said: “Yes, one may certainly have that impression, if one sees what has been done so far for the utilization of this data, the fact that Greece acted immediately and that we have reached a cooperation agreement, which we signed.”
He also said that the two sides did not just talk about the issue, but did something about it. “It is a good base for the strengthening of trust between Greece and its European partners,” he noted, adding that it is “a very good sign.”
Commenting on his meetings with Alternate Finance Minister Tryfon Alexiadis and Alternate Minister for Corruption Dimitris Papangelopoulos, Walter-Borjans said he “could not have imagined a more consistent cooperation.”
(source: ana-mpa)