Greek Farmers on the Road Again 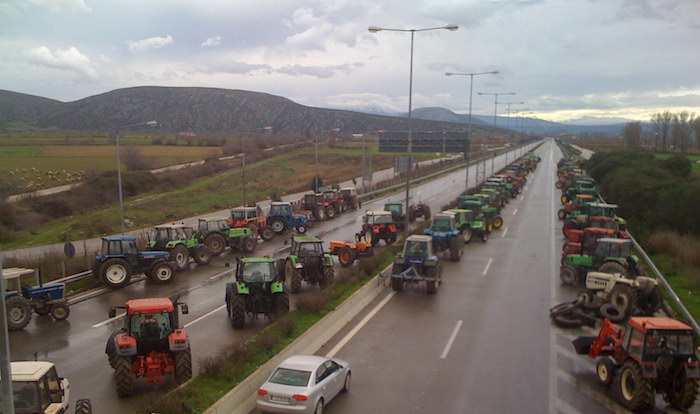 Whether it’s good or bad economic times, farmers in Greece love to make their demands known by threatening massive “tractor protests” in the city of Athens and by blocking the nation’s major highways.
These are terrible economic times and the Greek farmers are getting quite restless as they see that their livelihood is threatened, indeed, as a result of the imposition of ever higher taxes and the government’s plan for pension reform that will substantially reduce benefits for all present and future retirees while increasing the eligibility age. So their leading organizations have announced their plan to block the national highways on January 20 as a message to the government that they will not stand idle and watch the end of their livelihood take place.
How successful the new “tractor protests” may be remains to be seen as Greek farmers’ organizations rarely agree when it comes to protests, given that they are all controlled by different political parties. It does seem, however, that there is a consensus emerging this time around, which is not good news for the SYRIZA-led government.
If materialized, and the likelihood of farmer protests gripping Greece seems quite high right now, Greek farmers will be joining other labor organizations that have recently mounted protests against the government’s plan to overhaul the ailing pension system, in particular.
In sum, the SYRIZA-led government is expected to have its hands full this winter as it has to find a way to balance international creditors’ demands for ever more draconian measures and the increasing discontent on the part of virtually the country’s entire working population. Whether it will manage to find a way to do this is highly questionable, and prolonged farmer protests may not only add new pressures in a crippling Greek economy but also produce a social crisis of such magnitude that will cause a political legitimacy crisis for the governing party.