GRNews
GreekReporter.comGreeceGreek President: Only Together Can We Face Terrorism and the Refugee Crisis

Greek President: Only Together Can We Face Terrorism and the Refugee Crisis 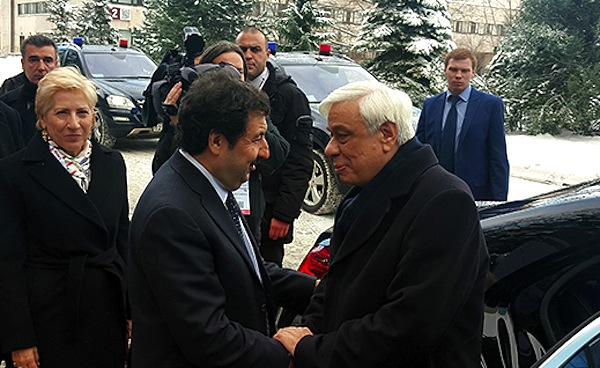 President of the Hellenic Republic Prokopis Pavlopoulos highlighted on Thursday the need for all countries to join forces and meet the global challenges created by the refugee crisis and terrorism, in statements after his meeting with Russian Duma Chairman Sergey Naryshkin in Moscow.
Addressing Pavlopoulos, who is currently visiting Russia, Naryshkin hailed the Greek President’s visit as extremely important for developing Greek-Russian bilateral relations.
“The relations of the two countries are not just based on our common historical roots, since we often have almost identical approaches on international matters. The known EU decisions hamper the full potential of our relations and we believe that we can overcome these problems. In your speech, you referred to very important matters, such as that laws must have the consent of citizens. These EU sanctions do not reflect the interests of our citizens and your excellent suggestions once again confirm the correctness of Greek views,” Naryshkin said.
Pavlopoulos referred to Naryshkin’s role as the “heart of the Russian State’s Parliamentary system” and noted that “Russia has taken significant steps in the framework of representative democracy.”
“I would like to stress to you that I – and by that I mean Greece – believe that the problems that have been created must be resolved as soon as possible. It is in the interests of Russia and the EU to normalize relations as quickly as possible and not just for economic reasons,” he added.
He noted that the world faces global problems, such as the refugee crisis and international terrorism, which could only be faced by everyone together.
“Today we face huge challenges of war throughout the planet that generate refugees and create conditions of an unprecedented and indescribable humanitarian crisis, which, beyond this, leads to blood that civilized humanity cannot possibly tolerate from ruthless terrorists.”
“We can no longer tolerate this situation, because it may possibly lead to irreparable consequences that we must avoid as fast as possible. Only jointly can we deal with the epicenters of war and peace-making. Only together can the democratic peoples carry out the fight against terrorists. Only jointly can we defend man in the present age,” he said.
Pavlopoulos is scheduled to meet with Russian President Vladimir Putin on Friday.
(source: ana-mpa)