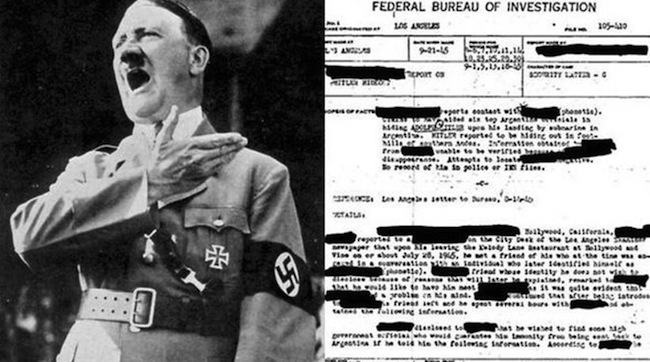 A new round of research into US government archives and other sources alleges that Nazi leader Adolf Hitler did not commit suicide in his bunker in Berlin but fled to Argentina, potentially through Greece and the Canary Islands.
Ex-CIA officer Bob Baer and former United Nations war crimes investigator John Cenich detail their research based on 700 recently declassified documents, interviews, historical and sonar maps, in a History Channel series named “Hunting Hitler.”
“American Army officials in Germany have not located Hitler’s body nor is there any reliable source that Hitler is dead,” the Daily Express quoted one of these documents.
Cenich claimed he was certain that Hitler and his wife Eva Braun used doubles. In fact, the corpse discovered by the Russians was a double, he alleged, the Express reported.
Cenich also spoke to a man claiming to have helped constructing secret escape tunnels for Germans in a monastery on the Greek island of Samos in 1945. The worker claimed he saw Hitler a few days after he committed suicide in Berlin.
“He was right there, he wasn’t wearing a moustache or anything. This was May 1945. I realized it was really Hitler because of the airplane,” he was quoted as saying. “I went to work in another town. The first thing I saw in this town was a German airplane. It had landed in an old potato field. The farmer told me there were five people who landed and they were German.”
From there, Hitler likely embarked on U-boat and ended up in Argentina.
“What we are doing is re-examine history, history that we thought was settled, that Hitler died in the bunker, but the deeper we get into it, it’s clear to me we don’t have any facts for it,” Baer explains in the research.

Tallest Woman in the World Reveals What Her Life is Like