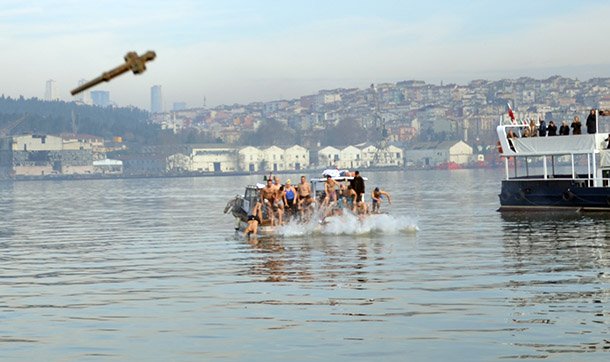 A bitterly cold Wednesday morning saw the return of one of Istanbul’s oldest – and most demanding – religious traditions as dozens of Greek Orthodox Christians swam frantically to retrieve a cross thrown into the Golden Horn.

The Greek community in Istanbul celebrated Epiphany, one of the Orthodox Church’s most important feasts that commemorates the baptism of Jesus Christ in the Jordan River.

Patriarch Bartholomew I threw a wooden cross into the icy waters of the Golden Horn after an almost four-hour religious ceremony at the nearby Patriarchate.

A waiting crowd of brave men and women then dived in, battling to be the first to retrieve the religious symbol.

More than 300 people, including tourists and local Turks, watched the cross-throwing ceremony from the Golden Horn shore.