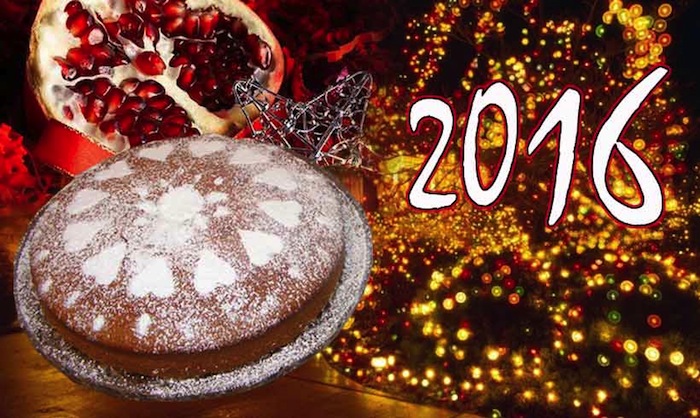 The warm festive atmosphere in the beautifully decorated Greek cities and villages is topped with customs and traditions that are revived in various regions across Greece.
Smashing Pomegranate
Families keep several traditions that are supposed to bring them luck for the rest of the year, such as stepping through the door with their right foot or smashing a pomegranate on the ground. Since ancient times both onions and pomegranates were considered as symbols of prosperity for the family and they allegedly brought good luck to its descendants. In many areas of Greece they hang a pomegranate in their home in autumn. After the New Year’s Eve church service, they smash the pomegranate at the door while wishing “Happy New Year!”
Santa Comes on New Year’s Day
“Agios Vasilis” waits a few days and brings the presents to Greek children on New Year’s Eve instead of on Christmas Eve as practiced in many other areas of the world. For this special occasion Greeks prepare a sweet, round cake called “vasilopita.” The head of the family ceremoniously cuts the cake at the turn of the year, the first three pieces are offered symbolically to Jesus, the Virgin Mary and “Agios Vasilis,” while the fourth piece goes to the family home. The rest of the sweet treat goes to family members in order of age. Inside the cake there is a hidden coin, which is often a token of value that will go to the lucky person who gets that piece. In some parts of Greece, the vasilopita is cut at the family table in the afternoon, on January 1st. Children’s shoes and socks are hung on the windows and the fireplace, waiting for Santa to fill them with gifts. At midnight many Greek families turn off the lights and open both the front and back door of the house so that the “old year” can leave and the new one can arrive in its place. Then they turn on the lights and wish everyone a “Happy New Year!”
Cretan Traditions
The people of Crete hang wild onions in their homes on New Year’s Day. The wild onions that grow on the island of Crete are poisonous and may cause skin rash. When uprooted, the wild onion are still able to grow new leaves and flowers. This rare quality signifies great natural power and makes them special for the people of Crete.
Momogeri
In various parts of Greece as in Pella, Karditsa and certain villages in Kozani, the residents carry out a custom for the fertility of the earth. During the days between Christmas and Epiphany people are disguised as “Momogeri” running in the streets dancing to the sounds of traditional instruments.