Archaeologists Uncovered Evidence of a Coup in Ancient Greece 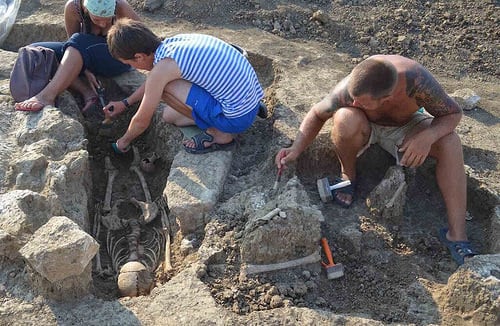 Russian archaeologists made a significant discovery while working in the ancient Greek city of Phanagoria, a city that used to be the capital of the Kingdom of Bosporous. The team found evidence of a violent coup that took place in the area and made the official announcement a few days ago.

The archaeologists found that parts of the city had been destroyed by a fire, around 480 BC, a fact that matches the historical records that note a transition in power in the Kingdom of Bosporous, around the same time. Specifically, the Archaeanactids dynasty was overturned by a Thracian dynasty.

According to the archaeologists’ announcement and their findings, when the coup took place, the city was destroyed by the violent clashes between people.

“One of the main results of the Phanagoria fieldwork this year is the hypothesis about possible reasons for the residents’ exodus in the 10th century,” said head archaeologist Vladimir Kuznetsov in a statement. “Phanagoria studies allow us to tie the history of the Byzantine Empire, Khazar Kaganate and Ancient Rus together.”

Due to bad weather conditions the archaeological excavation and research has been postponed for next year.

Phanagoria was the largest ancient Greek city on the Taman peninsula, Russia, spread over two plateaus along the eastern shore of the Cimmerian Bosporus. The city was a large emporium for all the traffic between the coast of the Maeotian marshes and the countries on the southern side of the Caucasus.