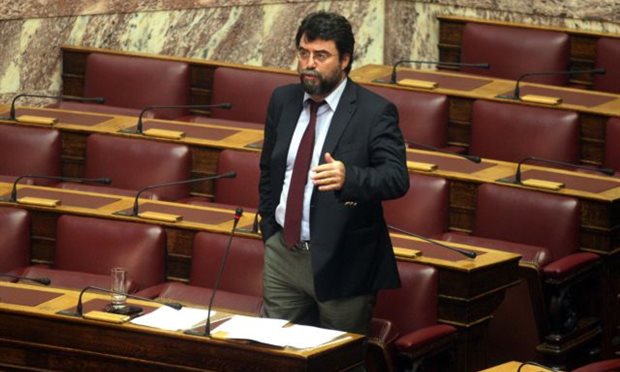 New Democracy MP Vassilis Economou was beaten up by hooded men while having dinner at an Exarcheia restaurant, in central Athens, on Tuesday night.

The 47-year-old conservative party lawmaker was with two friends at a bistro in Exarcheia. About 15 minutes after his arrival, a dozen men wearing hoods or motorcycle helmets entered the premises and attacked Economou.

The assailants approached and asked him if he was Economou. When he identified himself, the men punched and kicked him in the head and all over his body. After the attack they threatened him saying, “Never set foot here again. Exarcheia is no place for deputies.”

The MP went to the Red Cross Hospital to receive first aid for bruises and scratches. After coming out of the hospital, he told reporters the attack was premeditated, since his office is near the area.

“They said if I come here again they will execute me. I received punches and kicks all over my body. I couldn’t react,” Economou said. “This is unprecedented. We can’t have areas in Athens that are inaccessible, where people wearing hoods, acting like commandos of wretchedness, attack not only a deputy, but every citizen.”

“We can’t live in this jungle. Everyone must understand – the government first of all – that they must protect a person’s right to sit down and have a glass of wine, eat, and sit in peace,” he added. “We can’t have this kind of behavior in this country. I think we are out of control.”

House Speaker Nikos Voutsis called Economou while at the hospital and expressed his sympathy, while condemning the incident.