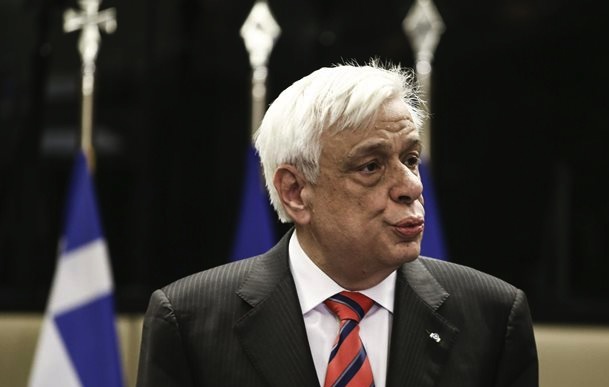 President of the Hellenic Republic Prokopis Pavlopoulos on Sunday referred at length to the issue of German war reparations and a forced occupation loan demanded by the Nazi administration, during his speech at an event in the town of Kalavryta, a scene of war-time atrocities in WWII. He noted that Greece ‘s demands were still “legally active and pursuable through the courts” and had on no account been written off.
“The rights of the victims of the German occupation army are a mission that serves not only the national rights of Greeks but also the culture and law and order in the European Union. Consequently in Germany itself,” he noted in a speech on the anniversary of the Kalavryta massacre.
After attending an event at the Paleologina manor house, where he was declared an honorary citizen, Pavlopoulos said it was a reminder “of our self-evident … duty not to lower the flag for the cause of vindicating the Kalavryta Holocaust’s sacred victims,” and send the message that “We do not forget. Never again.” He emphasized, however, that this message did not contain feelings of revenge but, on the contrary, was an obligation to the memory of the victims to seek unfailing implementation of the international law, as a fundamental sign that law and legality will eventually generally prevail.
Speaking in the presence of the German Ambassador to Greece Peter Schoof, Pavlopoulos said that it was a historic fact now also admitted by Germany, that the slaughter and destruction in Kalavryta on December 13, 1943 is the greatest and most odious war crime committed in Greece by the German occupation army in WWII.
He noted that Greece’s demands for repayment of the occupation loan and compensation to the victims of German occupation troops were “legally active and pursuable through the courts” and that neither had been written off, while having a firm basis in international law and the Hague Treaty of 1907.
On the second half of his message, Pavlopoulos said that Greece sent from atrocity-stricken Kalavryta a warning “urbi et orbi” that “we all have a duty to learn from the Kalavryta Holocaust” at a time when jihadist terror and criminal action “demands that we keep our awareness alert.”
(source: ana-mpa)