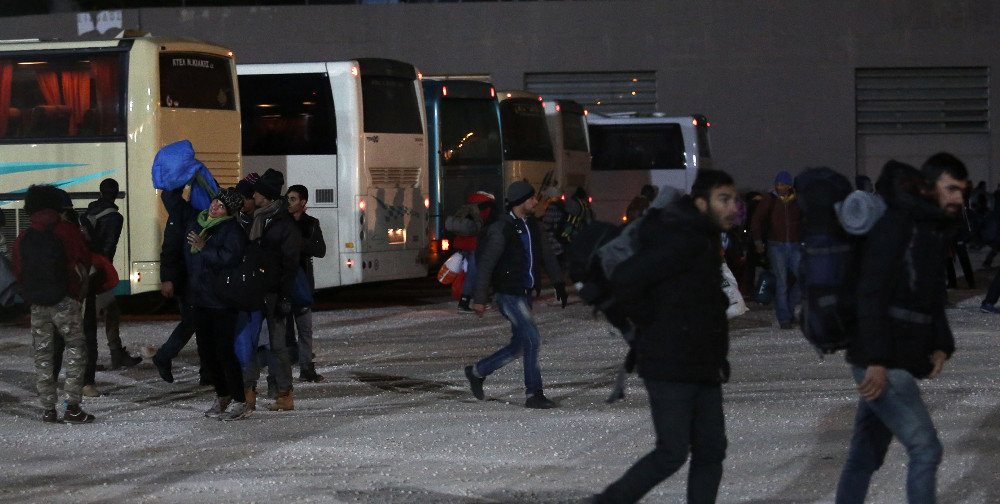 Greek authorities finished transferring about 2,300 migrants from the Greece-FYROM border to a former Olympic sports arena early Thursday morning.
Greek police used 45 buses to transfer a total of 2,300 migrants, mostly from Morocco, Iran and Soudan, from the Greece-Former Yugoslav Republic of Macedonia border. The migrants do not qualify for refugee status and they were denied entry to FYROM, as a transit point to western Europe.
Thirty-four buses transferred most of the migrants to the former taekwondo Olympic arena, while 11 buses took a number of them to the former ice hockey Olympic arena.
However, many of them dispersed and disappeared from the hospitality premises as soon as they arrived.
Non government organizations and the Red Cross were there to accommodate the migrants as the living conditions are not ideal.
Deputy Migration Minister Yiannis Mouzalas spoke to reporters and said that on December 17 the migrants will be transferred elsewhere but it hasn’t been decided where yet. Regarding the conditions inside the arena, the deputy said that until yesterday these people were hungry and sleeping on the ground. Now they have an enclosed place to stay with meals and bathroom facilities provided.
Mouzalas said that the migrants have 30 days to petition for asylum or return to their homelands. Otherwise, they will be deported.
The taekwondo arena is guarded by the police and there is no access to reporters.
The migrants in general, do not want to stay in Athens or Greece. Now that the FYROM border is closed, some of them told reporters that they will try to cross to western Europe through Albania and then Croatia. They said there are traffickers who can accommodate those who want to reach the destination of their choice.