Olympiacos Knocked Out of the Champions League 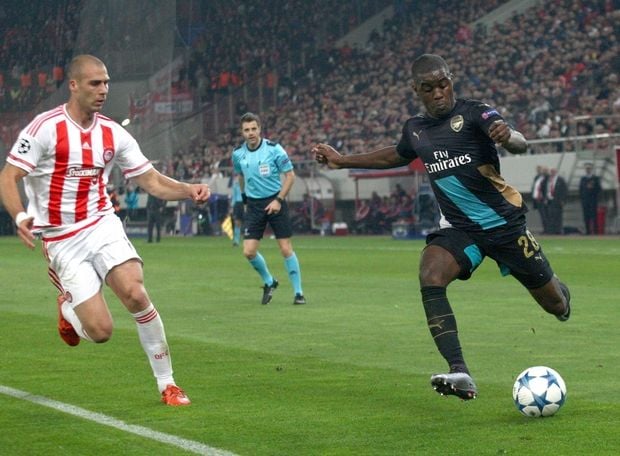 Olympiacos F.C. were unable to secure a result that would put them through to the round of 16 of the UEFA Champions League after suffering a 0-3 defeat to Arsenal at the Karaiskakis Stadium on Wednesday evening.
Arsenal striker Olivier Giroud proved to be Olympiacos’ nemesis scoring all three goals. The Frenchman scored his first goal in the 29th minute with a header. At 0-1 down Olympiacos still qualified as their previous 3-2 victory over Arsenal meant that they could still qualify with this scoreline.
Giroud however stormed through Olympiacos’s box and claimed a pass from Joel Campbell to score his second of the night in the 49th minute. With the new scoreline the Greek team would have to score one goal to secure qualification while incurring a loss.
That however, never happened and Giroud completed a hat-trick with a penalty kick in the 67th minute. Olympiacos’ Omar Elabdellaoui handled the ball inside the box leading the referee to call for the fateful penalty.
However, the Greek team’s European path is not over yet. Finishing third in Group F, Olympiacos will continue for the last 32 round at the Europa League competition.
The draw for the Europa League fixtures takes place on December 14.
Group F Standings
Bayern Munich: 15 points, +16 Goal Difference
Arsenal: 9 points, +2 Goal Difference
Olympiacos: 9 points, – 7 Goal Difference
Dinamo Zagreb: 3 points, – 11 Goal Difference