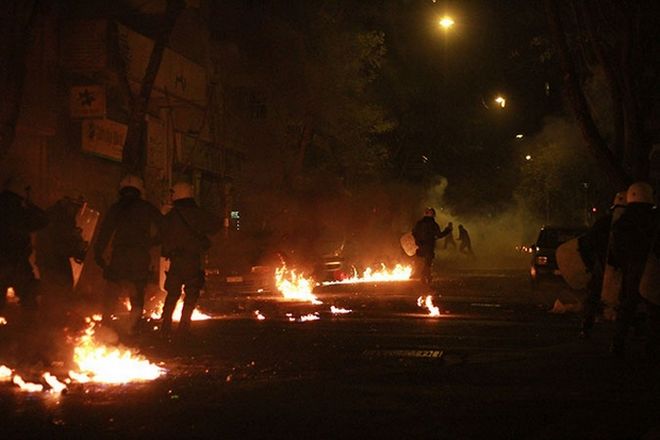 Greek Police arrested seven rioters who had attacked policemen with petrol bombs in the area of Exarchia around midnight on Friday.

It all started after a demonstration rally of leftist organizations protesting the arrival of U.S. State Secretary John Kerry in Athens. After the rally in front of the Athens University administration building, a group of youths moved to the nearby Exarchia neighborhood and tried to enter the building of the Athens Polytechnic.
A group of about 50 men with covered faces attacked a riot police squad while trying to enter the building courtyard. The skirmishes then moved further to Exarchia Square and surrounding streets. At some point the rioters reached 300, pelting stones and molotov cocktails at police. The police used tear gas.
At some point the youths dispersed, only to arrive later with reinforcements armed with flare guns, petrol bombs and rocks. One flare set a balcony on fire.
Police arrested seven rioters who were taken to the prosecutor on criminal charges.