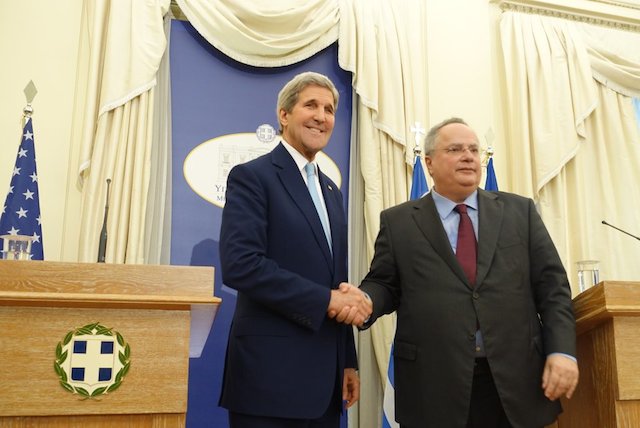 United States Secretary of State John Kerry concluded his visit to Greece with a meeting with Greek Foreign Affairs minister Nikos Kotzias on Friday afternoon.
“Η Αμερική στηρίζει την Ελλάδα” Kerry said in Greek, meaning that America supports Greece, kicking off his remarks during a joint press conference with Kotzias after their meeting. Kerry’s comments were largely positive, exalting Greece’s response to the ongoing financial and refugee crises and reaffirming of the two countries’ close ties.
Kerry also announced the United States will be donating 24 million euros to the United Nations Refugee Agency for their work in Europe. Almost 895,000 refugees and migrants have arrived in Europe this calendar year, more than 746,000 of which have entered through Greece, according to the UNHCR.
The Secretary of State further applauded Greece’s energy initiatives like the TAP and IGB pipelines as options that the United States could invest in. Kerry claimed that he will try to convey to American firms that Greece is open for business.
In the aftermath of his recent visit to Cyprus, he also discussed the ongoing negotiations over the Cyprus problem, which aim to reunify the island that has been divided for more than 40 years. Kerry had visited Cyprus on Thursday and called for a lasting solution after meeting with both Cypriot President Nicos Anastasiades and Turkish Cypriot leader Mustafa Akinci.
On his part, Kotzias praised Kerry as a diplomat and noted that Greece is a significant player in the region, which is not only being tested by the ongoing war in Syria but also instability in Ukraine.

Prior to meeting with his Greek counterpart, Kerry had met Greek Prime Minister Alexis Tsipras to whom he also expressed the United States’ support to Greece.
In the context of the refugee crisis, Kerry also visited the Non-Governmental Organization “Melissa” which is located in Athens. “Melissa’ focuses on assisting migrants and refugees as well as on immigration policy.
Kerry tweeted his experience at Melissa: