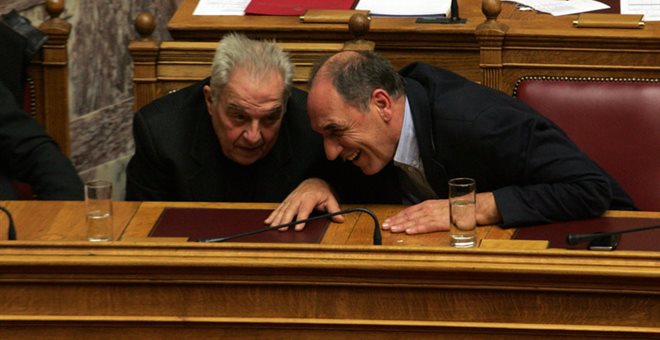 The Parliamentary Committee for Declaration of Assets of political persons is investigating again Economy Minister Giorgos Stathakis for failing to declare income and real estate properties in addition to the 1 million euros he was investigated for in October.
The committee, headed by SYRIZA MP Giorgos Varemenos, decided to probe further into the bank accounts and real estate deeds of Stathakis finding substantial discrepancies between his actual wealth and what he has declared.
Also, State Minister Alekos Flambouraris is being probed further because he allegedly is shareholder of a construction company that is receiving state contracts, something that is prohibited for members of parliament.
Varemenos said that there was more than the 1 million euros initially missing from Stathakis’ assets declaration. There were also differences in other bank accounts as well as undeclared real estate properties.
Stathakis claimed that the accounts being investigated belonged to his mother who had named both her sons as beneficiaries and they were declared in 2013 before his name was withdrawn in 2014.
“Regarding the real estate properties, there has not been the slightest discrepancy in my declarations. Some farming land that belongs to my wife was under litigation, however my wife’s share in this was no more than 3 percent and had been declared in 2013 and 2014,” Stathakis said. the minister did not hide his annoyance at the handling of the matter by the committee.
Auditors will also investigate Alekos Flambouraris’ accounts and initial statements that concern the years 2013-2014 to ensure if there are legal problems and a conflict of interest concerning the shares that he held in his construction company. Flambouraris claims he had sold his shares when appointed minister, but he never produced legal documents to support his claim.
The parliamentary committee referred the cases to auditors. Along with Stathakis and Flambouraris, 19 former parliament members and one active will be audited. Eight former MPs never submitted asset declarations, while 11 more owe taxes.