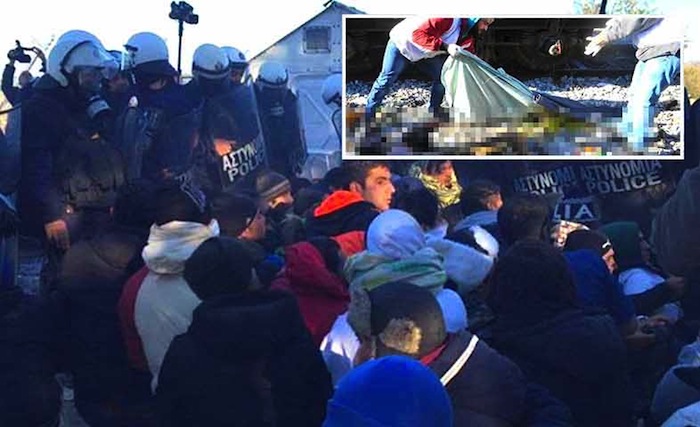 A 22-year-old Moroccan man lost his life this morning after suffering electric shock from the border fence in Idomeni, Greece. After praying for the young man, immigrants covered him with a black cloth and delivered his body to medical bearers in a makeshift stretcher.
Following the tragic event, the immigrants proceeded to the crossing point at the neutral area between Greece and FYROM where they continued shouting slogans The angry crowd was confronted by FYROM police who used tear gas to control the situation.
Situation Dire at Greece-FYROM Border

According to police reports, late last night, immigrant groups broke into containers and various tents owned by NGOs — which are set up in the camp to house food, medical supplies and other humanitarian aid — and began stealing the contents.
Representatives of several NGOs which are located in the area have evacuated, while at the same time a large group of refugees (Syrians, Iraqis, Afghans) located in a fenced field next to the camp, are appealing for water and food while waiting for the situation to defuse in hopes of crossing over to FYROM.

Meanwhile, a few meters further in the second camp located next to the Idomeni train station, long queues formed as some volunteers began handing out small portions of cooked food.
It is estimated that 6,000 immigrants and refugees are currently in Idomeni, 2,500 of which are not allowed to cross into FYROM. Outraged, these immigrants sit in front of the crossing point demanding that either everybody passes or nobody does, not even the refugees from Iraq, Afghanistan and Syria who are being allowed access.
The situation got out of hand this morning when tension — which included stone throwing and the dismantling of beams that support the barbed wire — started between refugees and protesting immigrants.

Nia Vardalos took to Instagram on April 7 to share updates on "My Big Fat Greek Wedding 3". Fans have been waiting to hear...
Greek News

Konstantinos Giapis, a professor of chemical engineering at Caltech invented a completely new way of producing oxygen from carbon dioxide.